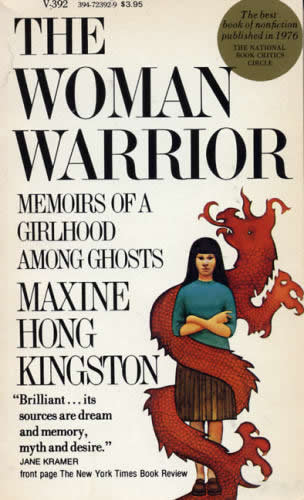 The Woman Warrior: Memoirs of a Girlhood Among Ghosts

In her award-winning book The Woman Warrior, Maxine Hong Kingston created an entirely new form—an exhilarating blend of autobiography and mythology, of world and self, of hot rage and cool analysis. First published in 1976, it has become a classic in its innovative portrayal of multiple and intersecting identities—immigrant, female, Chinese, American.

As a girl, Kingston lives in two confounding worlds: the California to which her parents have immigrated and the China of her mother’s “talk stories.” The fierce and wily women warriors of her mother’s tales clash jarringly with the harsh reality of female oppression out of which they come. Kingston’s sense of self emerges in the mystifying gaps in these stories, which she learns to fill with stories of her own. A warrior of words, she forges fractured myths and memories into an incandescent whole, achieving a new understanding of her family’s past and her own present.

Winner of the National Book Critics Circle Award for Nonfiction


"A remarkable book...As an account of growing up female and Chinese-Americanit is anti-nostalgic; it burns the fat right out of the mind. As a dream of the female avenger it is dizzying, elemental, a poem turned into a sword."
—The New York Times

“Superb. . . . We are in the presence of a splendid raconteur, who shares with us the myths and stories that emerge from the lode of a culture’s deepest realities.”
—Chicago Tribune

"A book of fierce clarity and originality."
—Newsweek