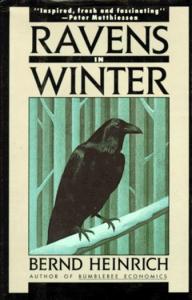 On a cold Maine day in October 1984, Bernd Heinrich, a field biologist, saw a flock of ravens sharing their food and apparently calling other ravens to join in. This struck Heinrich as so unexpected (why should solitary animals share?) that he spent seven years trying to find out whether this was what they were really doing, and if it was, why.

Heinrich watched ravens from the top of a giant spruce while they foraged, scaled cliffs to take fledglings for banding, set up a giant aviary. He was relentless. What he found rivals a detective story in its complexity, complete with false leads, contradictory clues and finally, hard evidence.