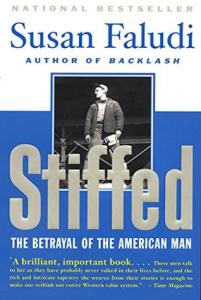 Stiffed: The Betrayal of the American Man

One of the most talked-about books of recent years, in Stiffed, the Pulitzer Prize-winning author of Backlash explores the collapse of traditional masculinity that has left men feeling betrayed. With Backlash in 1991, Susan Faludi broke new ground when she put her finger directly on the problem bedeviling women, and the light of recognition dawned on millions of her readers: what's making women miserable isn't something they're doing to themselves in the name of independence. It's something our society is doing to women. The book was nothing less than a landmark.

Now in Stiffed, the author turns her attention to the masculinity crisis plaguing our culture at the end of the '90s, an era of massive layoffs, "Angry White Male" politics, and Million Man marches. As much as the culture wants to proclaim that men are made miserable—or brutal or violent or irresponsible—by their inner nature and their hormones, Faludi finds that even in the world they supposedly own and run, men are at the mercy of cultural forces that disfigure their lives and destroy their chance at happiness. As traditional masculinity continues to collapse, the once-valued male attributes of craft, loyalty, and social utility are no longer honored, much less rewarded.

Faludi's journey through the modern masculine landscape takes her into the lives of individual men whose accounts reveal the heart of the male dilemma. Stiffed brings us into the world of industrial workers, sports fans, combat veterans, evangelical husbands, militiamen, astronauts, and troubled "bad" boys—whose sense that they've lost their skills, jobs, civic roles, wives, teams, and a secure future is only one symptom of a larger and historic betrayal.

Reviews:
"A brilliant, important book. . . . These men talk to her as they have probably never talked in their lives before, and the rich and intricate tapestry she weaves from their stories is enough to make one rethink our entire Western value system."
—Time


"Stiffed is an admirable, serious, and humane book. It records the dead-end [that] society has put men into as workers, parents, and citizens. Stiffed is blessedly free of jargon and full of telling detail. Its analysis is meant to provoke debate and will continue to do so."
—Slate


"Stiffed is a brilliant book, by a woman who likes us in spite of ourselves."
—CBS News


". . . the product of six years of aggressive reporting and an admirable knack for bringing the results to life. No one will ever put this book down for lack of vivid scene setting or compassionate observation."
—Judith Shulevitz


"Looking through new eyes, Stiffed gives both men and women a fresh appreciation for what it means—and more importantly how it feels—to be an American male in search of identity at a time when the definition of manhood is in question. Well-conceived, meticulously researched and well-written. . . . Stiffed is a landmark, a remarkable and rare book that will change the way men lok at themselves and help women understand them better."
—Columbus Dispatch


". . . a sprawling combination of reportage, cultural analysis and pop psychology, is both a trenchant critique of American culture and an embodiment of its most pernicious aspects."
—The Los Angeles Times


"This is brilliant stuff, cutting through nonsense, letting men speak for themselves and taking from their words original and compassionate insights. Bravo."
—Kirkus Reviews