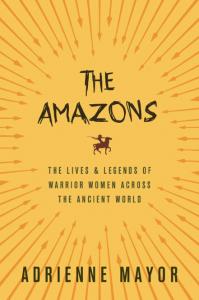 The Amazons: Lives and Legends of Warrior Women Across the Ancient World

Amazons, fierce warrior women dwelling on the fringes of the known world, were the mythic archenemies of the ancient Greeks. Heracles and Achilles displayed their valor in duels with Amazon queens, and the Athenians reveled in their victory over a powerful Amazon army. In historical times, Cyrus of Persia, Alexander the Great, and the Roman general Pompey tangled with Amazons.

But just who were these bold barbarian archers on horseback who gloried in fighting, hunting, and sexual freedom? Were Amazons real? In this deeply researched, wide-ranging, and lavishly illustrated book, National Book Award finalist Adrienne Mayor presents the Amazons as they have never been seen before. This is the first comprehensive account of warrior women in myth and history across the ancient world, from the Mediterranean Sea to the Great Wall of China.

Mayor tells how amazing new archaeological discoveries of battle-scarred female skeletons buried with their weapons prove that women warriors were not merely figments of the Greek imagination. Combining classical myth and art, nomad traditions, and scientific archaeology, she reveals intimate, surprising details and original insights about the lives and legends of the women known as Amazons. Provocatively arguing that a timeless search for a balance between the sexes explains the allure of the Amazons, Mayor reminds us that there were as many Amazon love stories as there were war stories. The Greeks were not the only people enchanted by Amazons, Mayor shows that warlike women of nomadic cultures inspired exciting tales in ancient Egypt, Persia, India, Central Asia, and China.

Driven by a detective's curiosity, Mayor unearths long-buried evidence and sifts fact from fiction to show how flesh-and-blood women of the Eurasian steppes were mythologized as Amazons, the equals of men. The result is likely to become a classic.


Cited in Washington Post, Smithsonian Magazine, and Newsweek after the discovery of a tomb containing the remains of four ancient Scythian Amazon women in December 2019

Winner of the 2016 Sarasvati Award for Best Nonfiction Book in Women and Mythology, Association for the Study of Women & Mythology

Shortlisted for the 2014 London Hellenic Prize

One of Foreign Affairs' Best Military, Scientific, and Technological Books of 2015


"In her quest to separate reality from mythology, Mayor left few stones unturned, even examining the graves of women with war wounds and mummified tattoos. She skillfully presents her findings with wit and conviction in this superbly illustrated book."
—Foreign Affiars

"The Amazons is elegantly written, nicely illustrated and will no doubt excite a lot of attention."
—Times Literary Supplement

"Mayor (The Poison King) looks at ancient writings and archeological evidence to argue that yes, 'Amazons' were based on real nomadic women, though much different from the way ancient Greeks or contemporary audiences imagine them. . . . Mayor speculates on the origin of such misconceptions in ancient writings and art, smartly suggesting that, though Amazons are usually depicted heroically in Greek art and mythology, the male-centric Greeks perhaps struggled to understand a society based on equality between the sexes. . . . Her expertise shines throughout."
—Publishers Weekly


“Fluidly written and exhaustively researched, this fascinating book lit up my mind and my sense of humanity, not just with women in it, but under it, above it, flinging out constellations and atoms; carving out grand canyons hand-in-hand with men and beasts and glaciers too."
—Neko Case for the New York Times


"[An] excellent history of female warriors."
—The Guardian