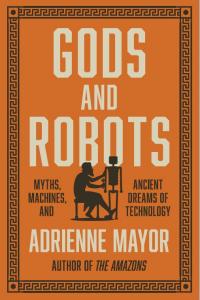 Gods and Robots: Myths, Machines, and Ancient Dreams of Technology

The fascinating untold story of how the ancients imagined robots and other forms of artificial life?and even invented real automated machines

The first robot to walk the earth was a bronze giant called Talos. This wondrous machine was created not by MIT Robotics Lab, but by Hephaestus, the Greek god of invention. More than 2,500 years ago, long before medieval automata, and centuries before technology made self-moving devices possible, Greek mythology was exploring ideas about creating artificial life?and grappling with still-unresolved ethical concerns about biotechne, “life through craft.” In this compelling, richly illustrated book, Adrienne Mayor tells the fascinating story of how ancient Greek, Roman, Indian, and Chinese myths envisioned artificial life, automata, self-moving devices, and human enhancements?and how these visions relate to and reflect the ancient invention of real animated machines.

As early as Homer, Greeks were imagining robotic servants, animated statues, and even ancient versions of Artificial Intelligence, while in Indian legend, Buddha’s precious relics were defended by robot warriors copied from Greco-Roman designs for real automata. Mythic automata appear in tales about Jason and the Argonauts, Medea, Daedalus, Prometheus, and Pandora, and many of these machines are described as being built with the same materials and methods that human artisans used to make tools and statues. And, indeed, many sophisticated animated devices were actually built in antiquity, reaching a climax with the creation of a host of automata in the ancient city of learning, Alexandria, the original Silicon Valley.

A groundbreaking account of the earliest expressions of the timeless impulse to create artificial life, Gods and Robots reveals how some of today’s most advanced innovations in robotics and AI were anticipated in ancient myth?and how science has always been driven by imagination.


• Featured on the Political Economy Podcast at American Enterprise Institute

Reviews:
"Throughout the book, the medical historian and classicist Adrienne Mayor charts the history of technological dreaming in the ancient world, from robot giants to lifelike statues that actually moved, or self-piloted boats."
—The Daily Beast

"Gods and Robots is a fascinating read...Ms. Mayor is also a compelling storyteller...I highly recommend Gods and Robots. It is an invaluable source of reflection and wisdom, at this crucial time when society and companies feel simultaneously drawn by, and pushed into, the promises of artificial intelligence and robotics. This book gives the much-needed perspective that we, as a society, need to chart a path forward to coexist with our increasingly autonomous creations, made not born."
—Quantitative Finance

"A fascinating unpacking of ancient myths that feature robots and other lifelike beings, some of which bear an eerie resemblance to modern technology...In her insightful analyses of these tales, Mayor is approachable and engaging, and she infuses many familiar stories with new energy in the context of technology. She adroitly explores the ethical aspects of artificial life, addressing big questions about sentience and agency through the lens of ancient ideas. She also makes a convincing argument that these imagined machines anticipated advances that are considered cutting-edge today. Ultimately, she leaves readers in awe of these thinkers who dreamed of 'androids' long before it was conceivable to build them. A collection of wondrous tales that present ancient myths as the proto-science fiction stories they are."
—Kirkus Reviews

"[A] lively study of mythology and technology....Mayor's exploration of the endless inventiveness of the Greek imagination makes for an engrossing read."
—Publisher's Weekly

"This is an excellent source book for confronting political and technological hubris then and now, the earliest arguable traces of modern fears."
—The Spectator (UK)