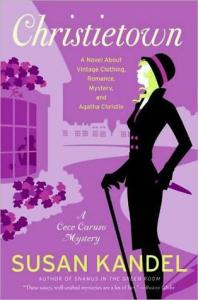 A new suspense-themed housing tract on the edge of the Mojave Desert is about to open, and who better to help promote the Cotswold-cozy development than mystery biographer extraordinaire Cece Caruso? For the grand opening weekend, Cece is staging a play featuring the beloved sleuth Miss Marple. Of course, everything goes wrong, including a leading lady who ends up dead.

All is not well in Christietown; its secrets are as complicated as the truth behind Agatha Christie's real-life disappearance. The developer, an Englishman who claims to be Dame Agatha's descendent, has ruthless investors breathing down his neck. Meanwhile, Cece's got a wedding to plan, a baby shower to give, and an ex-husband who shows up on her doorstep with his fiancée and future mother-in-law. And when another body surfaces, the intrepid amateur sleuth knows she must play the famed detective for real—or suffer the same mysterious fate.


“As with previous installments in this stylish series, Kandel deftly contrasts clever excerpts from Cece’s biographies with her personal dilemmas….”
—Publishers Weekly