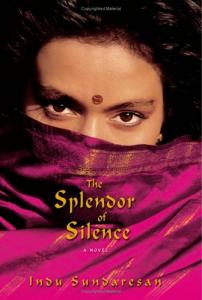 The Splendor Of Silence: A Novel

When Sam Hawthorne, a twenty-five-year-old U.S. Army captain, arrives at the princely state of Rudrakot in May of 1942, it is on a personal quest to find his missing brother. But Sam's mission is soon threatened by the unlikeliest of sources -- he falls hopelessly in love with Mila, daughter of the local political agent. And Mila, unexpectedly attracted to Sam, finds herself torn between loyalty to her family and the man she loves. A sweeping and poignant story of forbidden love, The Splendor of Silence opens twenty-one years later with Olivia, Sam's daughter, receiving a trunk of treasures from India, along with an anonymous letter that finally fills the silences of her childhood. She finally learns the heartrending story of her parents' passionate and enduring love affair -- throwing them in the path of racial prejudice, nationalist intrigue, and the explosive circumstances of a country on the brink of independence from British rule.

Reviews:
“Sundaresan unfolds her bittersweet story in flashbacks that are full of sharply drawn details and adroit dialogue. It’s a riveting read.”
—The Seattle Times


“Sundaresan returns to her native India for a sprawling story of forbidden love set against the backdrop of WWII and the struggle for Indian independence….Sundaresan renders Rudrakot vividly and the sympathetic characters generate enough friction to keep the pot boiling.”
—Publisher’s Weekly


“Sundaresan’s descriptive writing style makes for a colorful, engrossing read, and while the story does hop between time periods and locations, the reader is never lost along the way…this book is recommended for all libraries.”
—Library Journal


“With her third novel, Indu Sundaresan continues to display her talents as a great novelist of historical fiction. Finely researched and full of evocative details, this sweeping tale of intrigue brings to life a fascinating era with richly drawn characters and as story that is engrossing, deep, and surprising. Sundaresan will certainly please her many enduring fans as well as drawing in a wave of new ones.”
—Samina Ali, author of Madras on Rainy Days


“Indu Sundaresan expertly blends together history, memorable characters, and the sights, colours, and smells of India to create a hugely compelling novel. It is, quite literally, a feast for the senses"
—David Davidar, author of The House of Blue Mangoes