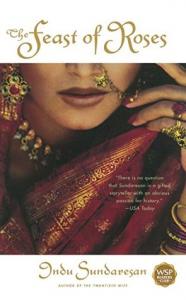 The Feast Of Roses: A Novel

The love story of Emperor Jahangir and Mehrunnisa, begun in the critically praised debut novel The Twentieth Wife, continues in Indu Sundaresan's The Feast of Roses. This lush new novel tells the story behind one of the great tributes to romantic love and one of the seven wonders of the world -- the Taj Mahal.

Mehrunnisa, better known as Empress Nur Jahan, comes into Jahangir's harem as his twentieth and last wife. Almost from the beginning of her royal life she fits none of the established norms of womanhood in seventeenth-century India.

Mehrunnisa is the first woman Jahangir marries for love, at the "old" age of thirty-four. He loves her so deeply that he eventually transfers his powers of sovereignty to her.

Power and wealth do not come easily to Mehrunnisa -- she has to fight for them. She has a formidable rival in the imperial harem, Empress Jagat Gosini, who has schemed and plotted against Mehrunnisa from early on. Mehrunnisa's problems do not just lie within the harem walls, but at court, too, as she battles powerful ministers for supremacy. These ministers, who have long had Emperor Jahangir's confidence and trust, consider Mehrunnisa a mere woman who cannot have a voice in the outside world.

Mehrunnisa combats all of this by forming a junta of sorts with three men she can rely on -- her father, her brother, and Jahangir's son Prince Khurram. She demonstrates great strength of character and cunning to get what she wants, sometimes at a cost of personal sorrow when she almost loses her daughter's love. But she never loses the love of the man who bestows this power upon her -- Emperor Jahangir. The Feast of Roses is a tale of this power and love, the story of power behind a veil.

Reviews:
“Broadly sticking to historical facts, Sundaresan has woven a fascinating and an engrossing fiction, revolving around the protagonist – Mehrunnisa, who defies all norms by refusing to be confined to the duties of an Empress and dares to re-define her role as a decision-maker.”
—Free Press Journal, Mumbai


“…riveting reading. Set against a fascinating backdrop, the book tells of a seventeenth century Mughal India, a relatively stable political order, bustling economically, replete with riches and a place where the English and Portuguese quarrel for trading privileges. This intricate canvas comes to life in Indu Sundaresan’s quietly casual, yet vividly descriptive prose, and also in the story that introduces a complex cast of characters from the rebellious Rajput chieftain Rana Amar Singh who lives spartanly in the remote mountain fastnesses to the English envoy Sir Thomas Roe who dresses stiffly in full English regalia despite the tropical heat. Characters like the Jesuit priests, the Jain monk, the palace attendants, the zenana eunuchs and the slave girls conjure up a gloriously opulent, almost decadent world.”
—Deccan Herald, Bangalore


“The narrative alternates between seductive languor and racy action which capture the opulence and drama of the Mughal kings. Sundaresan delightfully combines history and juicy gossip and her style has matured since the earlier novel, The Twentieth Wife.”
—India Today, New Delh


“In The Feast of Roses, she continues the second half of the empress’ life – and peppers it beautifully with her rich and well-informed vision of 17th-century Mughal India…Densely packed with historical detail and the florid descriptions of its era, Roses moves with relative speed through the days of this remarkable woman. Sundaresan logged plenty of hours researching these two volumes, but the results are never academic and always entertaining.”
—Seattle Weekly


“The Feast of Roses lushly chronicles the love affair that inspired the Taj Mahal, and the endless battles with rivals in the imperial harem and court ministers who want to undermine Mehrunnisa’s hard-won status.”
—The Sunday Oregonian


“Sundaresan weaves a seamless story, integrating solid research about the political affairs of the Mughal kingdom into the fictionalized account of Mehrunnisa’s life as empress so skillfully that she brings a sense of easy familiarity to Mughal court life.”
—The Seattle Times


“The Feast of Roses completes the story started in her well-received debut, The Twentieth Wife. The new novel may have even more appeal…since it includes the love story behind the building of the Taj Mahal.”
—Seattle Post


“The Feast of Roses is a continuation of the fascinating story of Emperor Jahangir and his 20th and last wife, Mehrunnisa; at the same time, it is the story of her strength and intelligence, her struggles and limitations within a traditional harem society, and her power and cunning in the face of her adversaries within the empire…The story of Mehrunnisa, though set in ancient times, still has resonance in the world today…Sundaresan’s imaginative storytelling allows readers to enter a world of juxtaposition between Mehrunnisa’s obligations and her desires, between her intimate self and her public self, and between her loving role as wife and her seemingly ruthless role as a ruler.”
—India West


“Sundaresan picks up the story of Mehrunnisa, the remarkable heroine from her debut novel…The novel’s scope and ambition are impressive, as are the numerous periods details and descriptions of the various cultural ceremonies that distinguish court life in royal India…The book’s setting brings to life an underexplored period in fiction…and readers who enjoyed the first volume will find similar pleasures tracking the fate of one of history’s most intriguing women.”
—Publishers Weekly