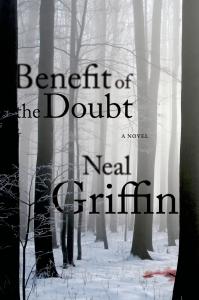 Benefit of the Doubt

Neal Griffin is a twenty-five year veteran of law enforcement. He's seen it all, from routine patrols to drug enforcement to homicide investigations, from corrupt cops to men and women who went far above and beyond the call of duty.

Benefit of the Doubt is a gripping thriller that exposes the dark underbelly of policing in small-town America, where local police departments now deal with big-city crimes and corruption.

Ben Sawyer was a big-city cop, until he nearly killed a helpless suspect in public. Now a detective in the tiny Wisconsin town where he and his wife grew up, Ben suspects that higher-ups are taking payoffs from local drug lords.

Before long, Ben is off the force. His wife is accused of murder. His only ally is another outcast, a Latina rookie cop. Worse, a killer has escaped from jail with vengeance on his mind, and Newburg-and Ben Sawyer-in his sights.


“Griffin’s an Escondido cop who, against lottery-long odds, has broken into and entered the high-gloss world of crime fiction (a tough neighborhood where Hollywood likes to hang out…. As introductions go, [the prologue] is right out of Elmore Leonard’s etiquette book. The hook is set…. In Benefit of the Doubt, stock characters are beefed up with current relevance.”
—The San Diego Union-Tribune

“Penned by a veteran police officer, this debut boasts the creepy, dangerous feel of the film Cape Fear and offers a compelling portrait of ethical burdens that often come with bearing a badge.”
—Booklist

“This debut novel by a 25-year police veteran is a well-written and action-packed crime thriller, featuring well-drawn characters who range from despicable to honest. With only one ally in the department, Sawyer must conquer his self-doubts and overcome the antagonism and corruption of other officers to solve the case, in the process transforming himself from disgraced cop to hero cop. This also sets up the next installment of what promises to be a popular series.”
—Library Journal

“[A] unique and suspenseful debut novel by a cop-turned-author who knows the turf. The story moves at warp speed.”
—Joseph Wambaugh, #1 New York Times bestselling author

“Benefit of the Doubt needs none—there is no doubt that this fine debut novel is the sure-handed work of an exciting new author.”
—Don Winslow, New York Times bestselling author of Savages

“A taut, hard-hitting morality play set in small-town America but rich with big themes: revenge, betrayal, and redemption. Neal Giffin is the new kid in town, and he is here to stay.”
—Andrew Goss, New York Times-bestselling author