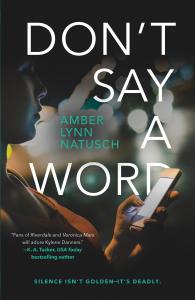 Kylene Danners’s ex-FBI agent father is in prison for murder and she’s hell-bent on getting him out. But trying to investigate in the small town where a defensive lineman is a hero no matter who he tries to kill and the girl who gets him locked up is public enemy number one is dangerous. Dark secrets are everywhere in Jasperville?the kind Ky can’t walk away from.

When rookie FBI agent Cedric Dawson returns to town to finish an open investigation, he goes undercover at her high school as her ex. Determined to keep her from interfering, Dawson’s plan backfires after Ky gets an anonymous call about missing girls officially labeled as runaways?runaways that didn’t really run away at all.

And they don’t say a word.

Reviews:
"Ky's instinct to help those who are most vulnerable makes her a winner. A heart-pounding mystery."
— Kirkus Reviews