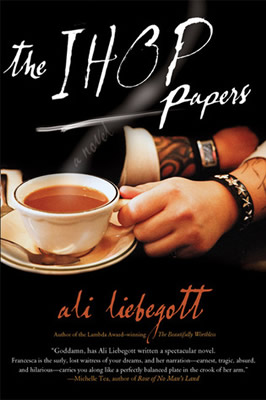 Francesca, a disgruntled nineteen-year-old lesbian, tries desperately to pull together the pieces of her scattered life. This hilarioius, heartfelt novel opens with Francesca newly arrived in San Francisco. She has fled her hometown, where she rented her childhood room from the new family who moved in when her parents moved out. The new tenants happened to be her childhood babysitter and her alcoholic husband. But Francesca's move to San Francisco is no mere coincidence. A lonely virgin searching for her sexual identity and obsessed with her philosophy teacher, Francesca has followed her professor, Irene, to California, where Irene has relocated to live with her young male lover and former student. Once in San Francisco, Francesca is forced to work at the local pancake house. Much to her dismay, she has to wear a ridiculous Heidi of the Alps uniform â€” which is almost as humiliating as serving the array of speed freaks and other graveyard shift misfits. Suicidal and euphoric, Francesca seeks solace in anything and anyone who might distract her from her unrequited love for Irene. More than a coming of age story, The IHOP Papers is a comic portrait of survival and self-discovery on the IHOP late shift.

Reviews:
“The IHOP Papers is…an amusing but bittersweet tale about sexual awakenings, addiction and recovery; attempts at communcal living with a narcissist; what it’s like growing up gay; how one lives one inch from the gutter but remains hopeful. The strength of The IHOP Papers lies in the beautiful but heartbreaking humor of Liebegott’s heroine. Francesca’s dark side is so amazingly optimistic…Her sexual journey is described graphically but with tender truth…”
—San Diego Union Tribune

“…filled with impressively realized vignettes about Francesca’s customers, her parents and her lovers.  Part of Francesca’s personality (and part of the story’s considerable force) is her fine ear for the tenor and cadences of other people’s speech…. Tender writing about a raw life."
—Kirkus Reviews


“Liebegott’s debut novel is a coming-of-age coming-out in the tradition of Rita Mae Brown’s Rubyfruit Jungle, but here, the portrait of an artist as punk waitress is more a celebration of sexuality than humanity….  The Lambda Literary Award-winning Liebegott (for her book-length poem The Beautifully Worthless) offers strikingly lyrical moments in an otherwise frank narrative of a writer teetering between adolescence and adulthood.”
—Publisher’s Weekly