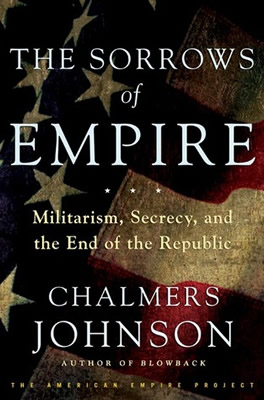 The Sorrows of Empire: Militarism, Secrecy, and the End of the Republic

From the author of the prophetic national bestseller Blowback, a startling look at militarism, American style, and its consequences abroad and at home.

In the years after the Soviet Union imploded, the United States was described first as the globes lone superpower, then as a reluctant sheriff, next as the indispensable nation, and now, in the wake of 9/11, as a New Rome. Here, Chalmers Johnson thoroughly explores the new militarism that is transforming America and compelling its people to pick up the burden of empire.

Reminding us of the classic warnings against militarismâ€”from George Washingtons farewell address to Dwight Eisenhowers denunciation of the military-industrial complexâ€”Johnson uncovers its roots deep in our past. Turning to the present, he maps Americas expanding empire of military bases and the vast web of services that supports them. He offers a vivid look at the new caste of professional warriors who have infiltrated multiple branches of government, who classify as secret everything they do, and for whom the manipulation of the military budget is of vital interest.

Among Johnsons provocative conclusions is that American militarism is putting an end to the age of globalization and bankrupting the United States, even as it creates the conditions for a new century of virulent blowback. The Sorrows of Empire suggests that the former American republic has already crossed its Rubiconwith the Pentagon leading the way.


“Sorrows of Empire may offer an enlightening window into the outrage and suspicion aroused in some segments of the American left by the post-911 policies of the Bush administration, and it does continue Blowback’s argument regarding the economic underpinnings of American imperial designs (perhaps the most interesting part of either book, though hardly uncontroversial).”--Journal of Military History

“Johnson has an enormous amount of detail…  It is impossible to read this book and not think that half these bases at home and abroad could be closed with an imperceptible loss in American security.  This is one of the book’s most telling assertions.  Johnson also effectively expounds on the Department of Defense’s efforts…  This is a frightening vision of the future.  Johnson outlines the problem with clarity and length…his facts are hard to refute and his conclusions are consistent with those facts.”--Review of Politics

“My favorite college professor, Chalmers Johnson, also had a book out his year, “The Sorrows of Empire: Militarism, Secrecy, and the End of the Republic.” As someone who used to take notes whenever he spoke, as someone how still has those notes, I think we’d be in a better place now if more people were listening to him.”--Journal News

“American imperialism and militarism took a serious turn for the worse at the end of the Cold War, argues Chalmers Johnson in his superbly researched book. He devotes most of "The Sorrows of Empire" to examining the numerous foreign bases (which have proliferated since the end of the Cold War), the often legitimate reasons for their initial establishment, the outrages that American servicemen perpetrate on their hosts, as well as the comforts and benefits of empire and militarism that prevent their abandonment. This "military imperialism," he argues, has undermined international law and organizations, weakened democracy at home, replaced truth with propaganda and courted financial ruin.”--San Francisco Chronicle

“Chalmers Johnson has written a polemic, jammed with history and carefully researched information, that warns powerfully against what he clearly sees as our own empire….This book needs to be read because the center of what he has to say is profoundly sobering.”--Santa Barbara News-Press

“Johnson dedicates the opening chapters of “The Sorrows Of Empire” to an analysis of the ascendance of the military and how it is being achieved.  Later on, he tackles America’s role in globalization, concluding that ‘it is in this economic sphere that the overstreched American Empire will probably first begin to unravel.’”--Tampa Tribune

“This book is a cry from the heart of an intelligent person who fears the basic values of our republic are in danger.”--New York Times

“When a nation falls into sinful ways, angry words and dire prognostications may be necessary to reawaken the people to the truth. In Chalmers Johnson the American empire has found its Jeremiah. He deserves to be heard.”--Washington Post

“Johnson has penned a ‘big picture’ book that fleshes out…the worst fears that Dwight Eisenhower had about the growing military-industrial complex…This is a challenging, brilliant, sobering book…a startling look at militarism, American style…Chalmers Johnson thoroughly explores the new militarism that is transforming America.”--BuzzFlash.com

“‘The Sorrows of Empire,’ by Chalmers Johnson, an Asia scholar and onetime consultant for the Central Intelligence Agency who has become a fervent critic of Washington's military policies, is an exhaustive … study of the spread of American military and economic control over the world. Johnson produces voluminous research on the many United States military and intelligence outposts unknown to most Americans, and weaves a frightening picture of a military-industrial complex grown into exactly the powerful, secretive force that Dwight D. Eisenhower warned against -- made more dangerous by an aggressive executive branch, creating a state of perpetual war and economic bankruptcy. His assessment is chilling: ‘It is not at all obvious which is a greater threat to the safety and integrity of the citizens of the United States: the possibility of a terrorist attack using weapons of mass destruction or an out-of-control military intent on displacing elected officials who stand in their way.’”--New York Times Book Review

“In ‘The Sorrows of Empire,’ Johnson makes the case for empire and allows readers to draw their own sinister conclusions about its inherent goodness…Johnson pours on tales of American hypocrisy, stupidity and excess one after another…they’re all here, carefully footnoted and 100 percent accurate…precisely because he’s probably right, Johnson’s ‘Sorrows’ is as maddening as it is important.”--San Diego Union Tribune

“A disquieting revelation of the effects of current affairs upon American freedom and democracy…Johnson is equally concerned with the potentially destructive consequences of U.S. actions for our constitutional republic…soundly grounded in an impressive array of facts and data. The costs of empire are our sorrows, he contends…‘The Sorrows of Empire’ offers a powerful indictment of current U.S. military and foreign policy. It also provides an occasion to consider the constitutional values of our republic.”--Los Angeles Times Book Review

“In his prescient 2000 bestseller,  BLOWBACK,  East Asia scholar  Johnson predicted  dire consequences for a U.S. foreign policy that had run roughshod  over Asia. Now he joins a chorus of Bush critics in his provocative, detailed  tour  of what he sees as America’s entrenched  culture of militarism…. one of the most startling and engrossing  accounts  of exotic defense capabilities,  operations and spending in print…”--Publishers Weekly