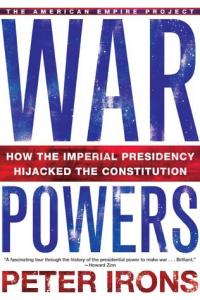 War Powers: How the Imperial Presidency Hijacked the Constitution

Concerned about the dangers of unchecked executive power, the Founding Fathers deliberately assigned Congress the sole authority to make war. But the last time Congress did so was in 1941, after the Japanese attack on Pearl Harbor--since then, every president from Harry Truman to George W. Bush has used military force in pursuit of imperial objectives without congressional authorization. In vivid detail, War Powers recounts this story of subversion from above. Drawing on congressional hearings, Supreme Court opinions, media reports, and scholarly accounts, legal historian Peter Irons examines how the Constitution has been stretched, distorted, and violated as presidents usurped a shared, solemn power--eschewing congressional approval and often suspending civil liberties in the process.

An insightful and rousing history, War Powers takes us up to the recent preemptive invasion of Iraq, offering a necessary account of our most pressing contemporary constitutional crisis.


Selected by San Francisco Chronicle as a Big Books of Summer highlight.


"War Powers is indispensable for Americans of any political party to understand what happens to the Constitution throughout our history when the separation of powers is bypassed by the president--and especially to understand what is happening now."
—Nat Hentoff, author of The War on the Bill of Rights-and the Gathering Resistance


“War Powers is a blistering indictment of a Congress that wimps out in the face of imperial presidencies.  As a reviewer, I am obliged to point out…the elegant arguments presented in a delightfully conversational style about a monumentally important yet woefully under-discussed issue.”
—San Diego Union Tribune


“Irons, a Supreme Court historian, picks up on many of the same cases that the Chief Justice examined, but where Rehnquist saw wartime necessity in curtailing civil liberties, Irons sees a pattern of presidential overreaching that federal judges have neglected to check. A chapter on the internment of the Japanese-Americans during the Second World War is a particularly forceful example of Irons's ability to build a persuasive argument rooted in constitutional case law.”
—Publishers Weekly


"The authors of the Constitution made it clear that only the Congress could declare war.  But, incredible as it seems, recent presidents have usurped that power. War Powers tells that incredible story.  Those who read it will forever demand more accountability and more transparency from their government."
—Robert F. Drinan, S.J., Professor, Georgetown University Law Center


"From his previous books, Peter Irons has earned a well-deserved reputation for putting a human face on the Constitution. War Powers, which recounts the stories of those who challenged the government's efforts to suspend the Constitution's protections during wartime, will add to his stature. Irons's skill in chronicling their ordeals reminds us that 'no fight for civil liberties ever stays won.'"
—Nadine Strossen, president of the American Civil Liberties Union, 1991-2008, and Professor of Law, New York Law School


"Peter Irons, with his customary lucid prose and clarity of thought, takes us on a fascinating tour through the history of the presidential power to make war. It is a sweeping, brilliant survey, written in a mood of growing alarm about the dictatorial power of the president, which has culminated in the present war in Iraq.  The book poses a challenge to all of us to reclaim democracy in the making of foreign policy."
—Howard Zinn, author of A People's History of the United States


"Once again, Peter Irons presents a magisterial and clear-eyed view of a pressing national problem.  He shows graphically how an 'imperial presidency,' going back to FDR, has replaced the original constitutional understanding of when and how our country goes to war-and specifies what can be done about it."
—Norman Dorsen, president of the American Civil Liberties Union, 1976-1991, and Stokes Professor of Law, New York University