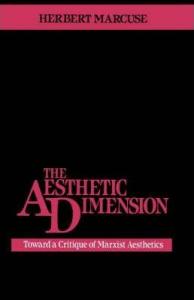 The Aesthetic Dimension: Toward A Critique Of Marxist Aesthetics

Developing a concept briefly introduced in Counterrevolution and Revolt, Marcuse here addresses the shortcomings of Marxist aesthetic theory and explores a dialectical aesthetic in which art functions as the conscience of society. Marcuse argues that art is the only form or expression that can take up where religion and philosophy fail and contends that aesthetics offers the last refuge for two-dimensional criticism in a one-dimensional society.

Reviews:
“His insights are genuine and his ... work, with its discussions of 18th and 19th century literature (by implication transferable to other modes of art) has a prophetic quality that suggests new generations will look at the Marxian model as a quaint artifact.”
—Publishers Weekly


“Marcuse has written a study of aesthetics that will be central to intelligent discussion of this subject for some time. It is one of those profound books which simply must be taken into account.”
—Theory and Society