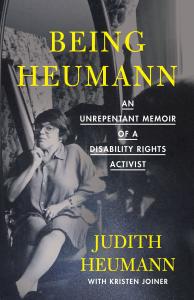 Being Heumann: An Unrepentant Memoir of a Disability Rights Activist

A powerful memoir of one of the most influential disability rights activists in U.S. history and her mission to create a more accessible world for all.

From fighting for educational access as a young person, to laying the foundation of the Americans with Disabilities Act as an activist, to ultimately working in Washington to establish disability rights as human rights, Judy's story will inspire readers to continue to fight for an accessible world for all.

Paralyzed from polio and raised by her Holocaust surviving parents, Judy Heumann's fight for equal access began early in life. She fought her high school, who initially denied her a diploma because of her inability to participate in gym; she fought her college who described her as "a fire hazard;" and she filed a lawsuit against the New York City school system, who denied her a teacher's license because of her paralysis, which she won.

As a young woman, Judy rolled her wheelchair through the doors of the U.S. Department of Health, Education and Welfare in San Francisco to demand protection for disabled peoples' rights, and organized what would be the longest takeover of a federal building in U.S. history.

Judy's story is a powerful reminder of the hard-fought battle to lay the groundwork for disability rights: the right to receive an education, have a job, ensure mobility access, and to just be human. Her memoir is a call to action for us to continue to fight for equal rights for all.

Reviews:
"Heumann’s personality shines throughout. Her voice is witty, persistent, and at times irreverent as she immerses readers in her story and highlights how similar we all are. Her tale is one of perseverance against discrimination, and the right of all people to pursue a full and fulfilling life. Ideal for readers interested in the history of the disability rights movement and the impact of personal activism.”

“A driving force in the passage of the Americans With Disabilities Act looks back on a long career of activism.”
—Kirkus

"Consider this book an inspiring call for inclusiveness, courage, equity, and justice as well as a reminder of people’s power to change the world for the better."
—Booklist

"Thoughtful and illuminating, this inspiring story is a must-read for activists and civil rights supporters."
—Publishers Weekly (starred)