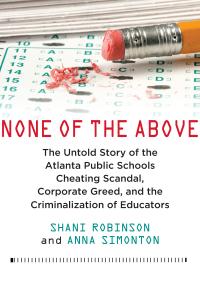 None of the Above: The Untold Story of the Atlanta Public Schools Cheating Scandal, Corporate Greed , and the Criminalization of Educators

An insider’s account of the infamous Atlanta Public Schools cheating scandal that scapegoated black employees for problems rooted in the education reform movement.

In March of 2013, 35 educators in the Atlanta Public Schools were charged with racketeering and conspiracy—the same charges used to bring down the American mafia—for allegedly changing students’ answers on standardized tests. All but one was black. The youngest of the accused, Shani Robinson, had taught for only 3 years and was a new mother when she was wrongfully convicted and faced up to 25 years in prison. She and her coauthor, journalist Anna Simonton, look back to show how black children in Atlanta were being deprived long before some teachers allegedly changed the answers on their students’ tests.

Stretching all the way back to Brown v. Board of Education, the landmark 1954 Supreme Court ruling that outlawed segregation in public schools, to examining the corporate-led education reform movement, the policing of black and brown citizens, and widening racial and economic disparities in Atlanta, Robinson and Simonton reveal how real estate moguls and financiers were lining their pockets with the education dollars that should have been going to the classroom.


“A former teacher convicted in the Atlanta Public Schools cheating scandal makes a strong case that students have been cheated by corporate profiteers and racist policies that undermine public education... Robinson claims she didn’t do it, and her book leaves no reason to doubt her.”
—Kirkus Reviews

“This collaboration of former Atlanta public school teacher Robinson and journalist Simonton is powerful, offering a bird’s-eye view into the now notorious 2013 cheating scandal... What grips the reader most is Robinson’s personal story, especially her other black teachers’ trial under the RICO act, ordinarily reserved for racketeers. A vivid and dramatic look at the consequences of the corporatization of public education.”
—Booklist

“Provides an in-depth look at how the cheating scandal unfolded, resulting in a modern-day witch hunt... Robinson’s own experience is engaging. For readers interested in educational reform, urban development, or the impact of race and racism.”
—Library Journal

“Sure to be an important and, I hope, influential book.”
—Noam Chomsky, author of Who Rules The World?, political theorist and professor of linguistics at Massachusetts Institute of Technology

“The publicity surrounding the Atlanta Public Schools cheating trial convicted Robinson in the court of public opinion. With this book, she has the opportunity to present her case in full. Her voice deserves to be heard.”
—Diane Ravitch, author of Reign of Error: The Hoax of the Privatization Movement and the Danger to America’s Public Schools, former National Education Secretary, founder of the Network for Public Education

“A blistering account written by a Black educator who has nothing to lose but fear. None of the Above is a stunning indictment of the loveless neoliberal politics of public education ‘reform’ that plagues predominantly Black communities like Atlanta. And those who conspired to create the theatre that was the cheating scandal should be shaking in shame upon reading.”
—Darnell L. Moore, author of No Ashes in the Fire: Coming of Age Black and Free in America

“None of the Above forces the reader to think about the high price of the commodification of public education in the United States as well as public policy issues surrounding issues of economic justice and political power. This book takes the reader inside the burning house that our public education system has become and seeks to show us a way out.”
—W. Ralph Eubanks, author of Ever is A Long Time and The House at the End of the Road

“Sobering and brilliant, None of the Above is one of the best, most timely books I’ve read.”
—Kiese Laymon, author of Heavy: An American Memoir

“Robinson has stood her ground at immense personal cost. Now, in this book, she and Simonton represent the best of teaching as they challenge taken-for-granted assumptions and reveal the root causes of urban school struggle—historic state neglect, racism, and profiteering at the expense of black communities. Will we learn or continue to scapegoat black teachers for a crisis they did not create? This is the real test.”
—Kristen Buras, professor of education policy at Georgia State University and author of Charter Schools, Race, and Urban Space: Where the Market Meets Grassroots Resistance

“In an affecting narrative with scrupulous reporting, Shani Robinson and Anna Simonton detail the hypocrisy and greed behind an ‘education reform movement’ that used the same test scores to award Georgia federal grant money while sending black teachers to prison. Providing facts lost amid the ensuing media circus and stoking resolve to serve those at the story’s true center—the children cheated of opportunity before they even make it to school—None of the Above is essential reading for those fighting to preserve public education.”
—Angela Ards, author of Words of Witness: Black Women’s Autobiography in the Post-Brown Era