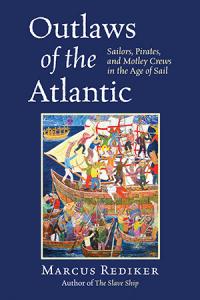 Outlaws of the Atlantic: Sailors, Pirates, and Motley Crews in the Age of Sail

In Outlaws of the Atlantic, award-winning historian Marcus Rediker turns maritime history upside down. He explores the dramatic world of maritime adventure, not from the perspective of admirals, merchants, and nation-states but from the viewpoint of commoners--sailors, slaves, indentured servants, pirates, and other outlaws from the late seventeenth to the early nineteenth century. Bringing together their seafaring experiences for the first time, Outlaws of the Atlantic is an unexpected and compelling peoples' history of the "age of sail."

With his signature bottom-up approach and insight, Rediker reveals how the "motley--that is, multiethnic--crews were a driving force behind the American Revolution; that pirates, enslaved Africans, and other outlaws worked together to subvert capitalism; and that, in the era of the tall ship, outlaws challenged authority from below deck.

By bringing these marginal seafaring characters into the limelight, Rediker shows how maritime actors have shaped history that many have long regarded as national and landed. And by casting these rebels by sea as cosmopolitan workers of the world, he reminds us that to understand the rise of capitalism, globalization, and the formation of race and class, we must look to the sea.


"The recent films of Johnny Depp may have recently brought the subject of pirates back into the public consciousness, but pirates and piracy have held a fascination and that has never gone away. Outlaws of the Atlantic: Sailors, Pirates, and Motley Crews in the Age of Sail is a deftly written history of piracy that is as informed and informative as it is entertaining. Very highly recommended for community and academic library collections. An ideal selection choice for non-specialist general readers with an interest in the history of piracy in the ‘age of sail.’"
—Midwest Book Review

“A top-notch examination of how indentured servants, privateers, pirates and slaves affected and even directed human history in the age of sail.... An outstanding view of the ‘seaman’ as a ‘preeminent worker of the world.’”
—Kirkus Reviews