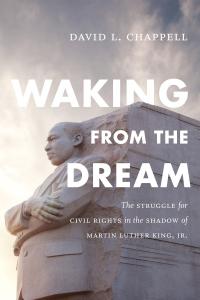 Waking from the Dream: The Struggle for Civil Rights in the Shadow of Martin Luther King Jr.

In Waking from the Dream David L. Chappell--whose book A Stone of Hope the Atlantic Monthly called "one of the three or four most important books on the civil rights movement"-- provides a sweeping history of the fight to keep the civil rights movement alive following Martin Luther King, Jr.'s assassination. Chappell reveals that, far from coming to an abrupt end with King's death, the civil rights movement continued to work to realize King's vision of an equal society. Entering a new phase where historic victories were no longer within reach, the movement's veterans struggled to rally around common goals; and despite moments where the movement seemed to be on the verge of dissolution, it kept building coalitions, lobbying for legislation, and mobilizing activists. Chappell chronicles five key events of the movement's post-King era: the passage of the Fair Housing Act in 1968; the debates over unity and leadership at the National Black Political Conventions; the campaign for full-employment legislation; the establishment of Martin Luther King, Jr. Day; and Jesse Jackson's quixotic presidential campaigns. With Waking from the Dream, Chappell provides a revealing look into a seldom-studied era of civil rights history, examines King's place in American memory, and explains how a movement labored to overcome the loss of its leader.


“Published to coincide with the 50th anniversary of Martin Luther King Jr.’s "I Have a Dream" speech, this revisionist work has a double-edged title. It examines not only the Civil Rights struggle but the struggle of many--activists, scholars, and more--to control King’s legacy and image. Leading civil rights authority Chappell, who wrote the highly regarded A Stone of Hope, is set to make us think.”
—Library Journal

"David L. Chappell's Waking from the Dream powerfully reveals the way the civil rights movement plodded on -- in creative, often conflicted, and sometimes surprisingly successful ways -- long after King was assassinated. Chappell brings to light the vitality of post-King-era black politics--from the National Black Political Conventions of the early 70s, to the movement to institute a judicially enforceable right to a job, to Jesse Jackson's runs for the presidency whose ripple effects were far reaching. In the process, Chappell dramatizes the tensions between the temptations of charismatic leadership and the anonymous grassroots political work that creates the foundations of change. This is a splendid book about the hard work of democracy--one that will inspire all who care about democracy."
—Jack Turner, University of Washington-Seattle, author of Awakening to Race: Individualism and Social Consciousness in America

“David Chappell brilliantly recovers the usually neglected ferment and experimentation of a generation of Americans who tried to make good the goals of the civil rights movement in the years since Martin Luther King’s assassination. In the dysfunctional politics of Obama’s America,  everybody should draw  important, even uplifting, lesson’s from these efforts which Chappell has portrayed in such a clear-eyed and unsentimental way. It is also a masterly, thoughtful  examination of the very different ways in which Dr King’s name has been invoked since 1968."
—Tony Badger, Paul Mellon Professor of American History, Cambridge University, author of Prosperity Road and The New Deal

“Waking from the Dream offers the kind of clear-eyed analysis of our post-civil rights worlds of politics and memory work that we desperately need. Through his careful reading of newspaper accounts, oral histories, and moments of political grand-standing, David Chappell gets to some essential truths about the costs and benefits of myth-making. While it is sobering to watch people fight for their concept of justice while deliberately playing fast and loose with theidea of Martin Luther King, Jr., it is critical that we know this history so that we can properly contextualize the successes and failures of civil rights politics that brought us to this allegedly post-racial age."
—Jonathan Holloway, Yale University, author of Jim Crow Wisdom: Memory and Identity in Black America Since 1940

“Beautifully written and thought-provoking.  Historians have cast the period after King’s death as the New Nadir.  The constant invocation of his name by allies, outsiders, and enemies made it appear as if nothing could measure up to his image, memory, or the seminal feats of Montgomery, Birmingham, and Selma. It was the American version of ‘Things Fall Apart.’ Chappell, however, has uncovered what the bright light of King has blinded so many to -- the ongoing work by communities, politicians, and NGO's to build and sustain a more inclusive rights-based nation."
—Carol Anderson, Emory University, author of Eyes off the Prize: The United Nations and the African American Struggle for Human Rights, 1944-1955.