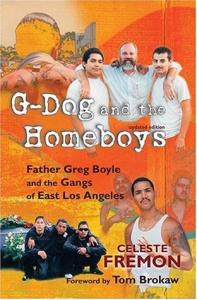 G-Dog and the Homeboys: Father Greg Boyle and the Gangs of East Los Angeles

Of all the gang-riddled urban corners in America, the Pico-Aliso neighborhood of East Los Angeles is among the most intense. Eight separate gangs—seven of them Latino—fight for turf here every night in desperate confrontation. The constant maelstrom of high drama and tragedy has bred a dramatic and desperate cast of characters. These are the homeboys—young men between the ages of thirteen and twenty-two, with names like Wicked, Shotgun, and Ghost—who have turned to the streets for self-definition. And Father Greg Boyle is often the one safe anchor in the constantly shifting turbulence of their lives.

In a world with too few genuine heroes, Greg Boyle is the real thing. A complicated and charismatic man, Father Greg (or “G-Dog,” as the kids call him) offers hope to these young men and women on whom the rest of the world has given up. Father Greg is one to whom the mothers in the neighborhood turn to pull their sons back from the brink of despair—or to bury their sons when hope and help did not come soon enough.

With unflinching, in-your-face clarity reminiscent of Nathan McCall’s Makes Me Wanna Holler and Kody Scott’s Monster, author Celeste Fremon takes the reader into the previously unexplored realms of contemporary Mexican-American street gangs. Fremon opens the door to this world with detailed portraits of the East L.A. homeboys’ brutality and of their dreams, their anguish, and their humanity—all against the backdrop of the priest’s relentless battle to stop the killing. Finally, after giving years to what he believes is his true calling, by decree of the Catholic hierarchy, Father Greg is sent away from the community and the homeboys who have come to love and depend upon him. It is then that we see the power of the mothers of the barrio as they go to war to bring their priest back “home.”