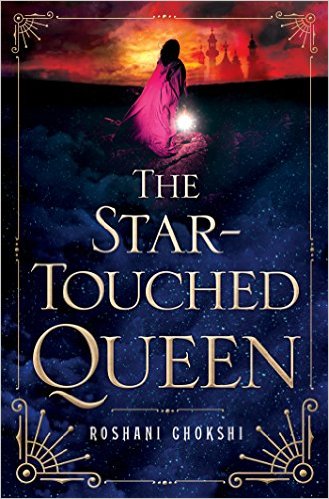 Cursed with a horoscope that promises a marriage of Death and Destruction, sixteen-year-old Maya has only earned the scorn and fear of her father's kingdom. Content to follow more scholarly pursuits, her world is upheaved when her father, the Raja, arranges a wedding of political convenience to quell outside rebellions. that's a slash

But when her wedding takes a fatal turn, Maya becomes the queen of Akaran and wife of Amar. Yet neither roles are what she expected. As Akaran's queen, she finds her voice and power. As Amar's wife, she finds friendship and warmth.

But Akaran has its own secrets - thousands of locked doors, gardens of glass, and a tree that bears memories instead of fruit. Beneath Akaran's magic, Maya begins to suspect her life is in danger. When she ignores Amar's plea for patience, her discoveries put more than new love at risk - it threatens the balance of all realms, human and Otherworldly.

Now, Maya must confront a secret that spans reincarnated lives and fight her way through the dangerous underbelly of the Otherworld if she wants to protect the people she loves.

The Star-Touched Queen is a lush, beautifully written and vividly imagined fantasy inspired by Indian mythology.

A top ten finalist in the 2017 Locus Awards in the First Novel category.

A Barnes & Noble pick for Best Young Adult Books of 2016

A Bustle pick for Best Young Adult Book of 2016


“Chokshi’s rich, descriptive writing weaves a lush web. A swoony romance, betrayal, and a journey to power and self-affirmation, with a slightly wicked, slightly funny animal sidekick in the best tradition work together to create a spell that many readers will willingly succumb to. Richly imagined, deeply mythic, filled with lovely language with violet overtones: this is an author to watch."
—Kirkus Reviews


“[An] exquisite debut novel…Chokshi’s prose is captivating, and the pages come alive through lush descrptions of Night Bazaar teeming with Otherwordly delights, gardens made of glass, and realsm where the lines between life and death are blurred. Maya is a strong heroine, and while there is romance, an emphasis on familial love adds another level of richness to a folkloric fantasy about sacrifice, self-discovery, and making your own destiny."
—Publisher’s Weekly (starred)


“Chokshi’s first novel is filled to the brim with gorgeous, scintillating writing that easily draws readers into its new take on traditional tales. A unique fantasy that is epic myth and beautiful fairy tale combined."
—Booklist


"Magic is woven into every word of the The Star-Touched Queen Vibrantly imaginative and gracefully written, I was spellbound from the first line. A dazzling, sensuous feast of world-building, romance, and mythology."
—Sarah J. Maas, New York Times Bestselling author of the Throne of Glass series.


"The Star-Touched Queen enthralls with mystery and romance. Chokshi's storytelling glimmers like magic on every page-a novel meant to be savored."
—Cindy Pon, author of Serpentine and Silver Phoenix

"The Star-Touched Queen is a luscious, bloodthirsty fairy tale with all the romance, magic, and gorgeous mythology I could ask for, plus the greatest flesh-eating, talking demon horse I never knew I wanted."
—Tessa Gratton, author of Blood Magic and The United States of Asgard series

"Gorgeously poetic writing gives vibrant, sensuous life to the worlds of The Star-Touched Queen. Chokshi never shies away from forcing her characters to make hard choices, and I was captivated by Princess Mayavati's cleverness and determination as she struggles against fate and betrayal."
—Kate Elliott, World Fantasy Award finalist and author of Court of Fives

"A richly detailed world and a story filled with twists and turns, The Star-Touched Queen had me breathless right up until the final, stunning conclusion. Roshani Chokshi has crafted a bewitching tale with a setting so vivid and unique, I wished I could step right through the pages."
—Amy Ewing, New York Times Bestselling Author of The Jewel.


Selected as one of the 15 highly anticipated YA books of 2016 by Goodreads:
“What do you get when you take a classic Hades and Persephone-style romance and infuse it with Indian mythology? This gorgeously written story about a Raja's daughter and the curse that will forever change her life.”


Selected as one of the 15 most anticipated debut YA novels of 2016 by Barnes & Noble:
“Chokshi weaves a mystical fantasy that drips with lush enchantments, pushing past the tropes and older tales it nods toward to walk a fresher, more perilous path.”


Selected as one of the 16 YA Books to Watch for by Buzzfeed
“Maya lives with a cursed horoscope that’s caused trouble among her father’s kingdom. But in an extreme turn of events lead her to marrying Amar and becoming queen of Akaran, she discovers a threat to not only her world, but other realms. Inspired by Indian mythology, this YA fantasy will immediately suck you in.”