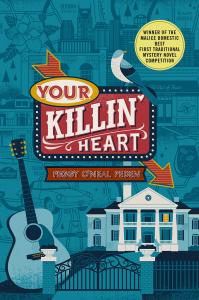 Your Killin' Heart: A Mystery

Contrary to popular belief, not everyone in Nashville is an aspiring country music star. Campbell Hall, for one, just wants to get her travel agency off the ground and move on from a break-up. But when she gets the opportunity to visit the mansion of mysterious country icon Jake Miller, she jumps at the chance. After all, who knows what clues are lurking around the long-dead star’s last home?

But as Campbell pokes around, she discovers more than a few sequined suits and priceless memorabilia. She finds Hazel Miller, Jake’s widow, quietly resting in a bedroom on the main floor. But Hazel might just be dead quiet. And Campbell might just be the last person to have seen her alive.

Juggling the twisty plots of high-profile country stars with her blossoming business?not to mention the tattered remains of her love life?Campbell thinks she’s got everything figured out. But when the danger becomes personal, she must uncover a killer who will stop at nothing to get what they want?or face the music.

With Your Killin’ Heart, award-winning author Peggy O’Neal Peden has given us a witty debut full of Nashville charm and generous heart.


"Winner of the Malice Domestic Best First Traditional Mystery Novel Competition, Peden's debut vividly captures the Nashville music scene and the city's Southern atmosphere. Campbell is a charming amateur sleuth, loyal to a fault. Verdict: Fans of Tonya Kappes's books and readers who enjoy humorous whodunits with a strong sense of place will find this one delightful."
—Library Jounal (starred)