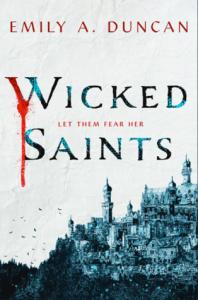 A girl who can speak to gods must save her people without destroying herself.

A prince in danger must decide who to trust.

A boy with a monstrous secret waits in the wings.

Together, they must assassinate the king and stop the war.

In a centuries-long war where beauty and brutality meet, their three paths entwine in a shadowy world of spilled blood and mysterious saints, where a forbidden romance threatens to tip the scales between dark and light. Wicked Saints is the thrilling start to Emily A. Duncan’s devastatingly Gothic Something Dark and Holy trilogy..

• Trending at #5 on Goodreads Movers & Shakers list, as the only YA

• Featured in Goodreads Latest YA for April


"Emily Duncan has crafted a beautiful and brutal world and magic system. The focus on religious conflict is also fascinating and at the core of Nadya’s motivation... I was absolutely enthralled by the cutthroat war and relationships in this book... Most of the story is building up to the action-packed finale. I have not read anything quite like it recently, and I enjoyed the unpredictable ride it takes readers on... I highly recommend WICKED SAINTS to fantasy readers. Emily Duncan’s writing style reminds me of Leigh Bardugo’s. If you enjoyed the setting of Grisha Trilogy and the characters of SIX OF CROWS, I believe you will enjoy WICKED SAINTS. Duncan’s debut novel is perfect for readers looking for intrigue, dark magic and betrayal on every page."
—Teenreads

“This gothic jewel of a story will sink its visceral iron claws into you, never letting go until you’ve turned the last page.”
—Robin LaFevers, BookRiot

"If you like your young adult fantasy full of ice, blood, and angst, Wicked Saints will sweep you up in its wintery embrace."
—National Public Radio (NPR) Book Reviews

“Prepare for a snow-frosted, blood-drenched fairy tale where the monsters steal your heart and love ends up being the nightmare.”
—Roshani Chokshi, New York Times bestselling author of The Star-Touched Queen

“This book destroyed me and I adored it.”
—Stephanie Garber, New York Times bestselling author of Caraval

"This is the novel of dark theology and eldritch blood-magic that I've been waiting for all my life."
—Rosamund Hodge, author of Cruel Beauty and Bright Smoke, Cold Fire

“Wicked Saints is a lush, brutal, compelling fantasy that is dark, deep, and bloody—absolutely riveting! With a boy who is both man and monster, mysterious saints with uncertain motives, and a girl filled with holy magic who is just beginning to understand the full reaches of her power, this gothic jewel of a story will sink its visceral iron claws into you, never letting go until you’ve turned the last page. And truthfully, not even then—the explosive ending will haunt you for days!”
—Robin LaFevers, New York Times bestselling author of the His Fair Assassin trilogy

"Monstrously romantic."
—Margaret Rogerson, author of An Enchantment of Ravens

"Rarely does a dark, magical epic have so effective a character-grounded sense of humor."
—Bulletin of the Center of Children’s Books Review

"This dark fantasy starts off with a bang... The upfront presence of the gods adds an intriguing twist to a brutal story. The ending is as powerful as the opening, and there are explosive elements waiting to detonate in the expected sequels."
—Booklist