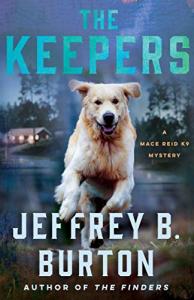 Mason “Mace” Reid lives on the outskirts of Chicago and specializes in human remains detection—that is, he trains dogs to hunt for dead bodies. He calls his pack of cadaver dogs The Finders, and his prize pupil is a golden retriever named Vira.

When Mace Reid and Vira are called in to search Washington Park at three o'clock in the morning, what they find has them running for their very lives. The trail of murder and mayhem Mace and CPD Officer Kippy Gimm have been following leads them to uncover treachery and corruption at the highest level, and their discoveries do not bode well for them . . . nor for the Windy City itself.

The Keepers is an exciting, fast-paced mystery filled with courageous dogs you'll want to root for.

“Compulsively readable suspense fiction with the best crime-solving duo since Holmes and Watson! Hugely entertaining and not to be missed!” – Tim Waggoner, Bram Stoker Award-winning author of Your Turn to Suffer

"Welcome to the world of Mason Reid who goes by Mace, and his golden retriever Elvira who goes by Vira. Together they find dead bodies in the most innovative crime fiction series of the 21st Century. In their second outing, the lovable team is on the trail of murder and corruption. You don’t have to be a dog lover to give this book five woofs!”  -- Paul Levine, author of the #1 Amazon bestseller Bum Rap

Reviews:
"The follow-up to The Finders sets a relentless pace. Corrupt politicians, the mob, a brutal killer, and a shocking death combine in a fast-paced story of an ordinary man and his extraordinary dogs. For fans of Paula Munier’s or Susan Furlong’s books featuring dogs." Library Journal (starred review)

"Burton carefully crafts each dog’s personality, ensuring that they, like the humans, are fully realized characters. Dog lovers are in for a treat." --Publishers Weekly