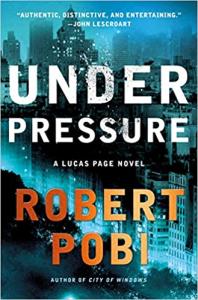 Robert Pobi’s popular and critically-acclaimed Lucas Page thriller series continues with book two, UNDER PRESSURE. Page is called back to the FBI after an aerosol explosion at the Guggenheim Museum during a fund-raising event for Horizon Dynamics brutally kills hundreds of New York’s eco-friendly sandal crowd and Park Avenue wealthy.

Then there’s another, very different explosion across town, and then another, and another and it’s a race against time for Page and his team of geniuses as they attempt to reverse engineer the blasts and simultaneously try to figure out the common threads that could possibly connect each crime scene.

Reviews:
"In Pobi’s stellar sequel to 2019’s City of Windows, astrophysicist, bestselling author, and former FBI agent Lucas Page, who was severely injured in an accident years earlier and now has a prosthetic arm and leg, reluctantly returns to duty after a thermobaric bomb explodes in Manhattan’s Guggenheim Museum during a private gala, killing more than 700 people with little damage to the building. The alleged bomber sends a manifesto of sorts to news outlets calling for immediate revolution and a rejection of technology. As the bombings continue—and the body count rises—Page uses his unique way of looking at the world in geometric terms to find connections among the targeted sites and victims. Page stands out as a highly unusual lead in a crowded genre, and Pobi combines a razor sharp sense of humor with surgical use of political and social commentary throughout. This is a must for fans of sophisticated crime fiction."
--Publishers Weekly (starred review)

"Under Pressure most certainly will have you guessing right up to the big finish. Just like its predecessor, it moves at a breakneck pace that barely allows you to catch your breath as the action moves from one edge-of-your-seat moment to the next. Pobi has a great thing going here, and Lucas Page is quickly becoming one of my favorite characters in modern thriller fiction."
--Book Reporter


"Each of the characters in Mr. Pobi’s complexly plotted book is skillfully drawn, but Lucas Page is one of a kind...Inspirational flashes send him into a mental world presenting itself as a numerical hologram, helping him to see the unexpected patterns that lead to the least likely culprit."

"A thrillride of a novel."
--Booklist


"Under Pressure is another excellent novel in this new series. Page is a great protagonist, and Whitaker and Kehoe are excellent support for him. I’m really looking forward to more novels in this series and by this author. Definitely recommended."
--Civilian Reader