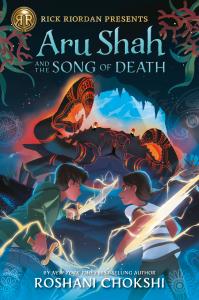 Aru Shah and the Song of Death (Pandava Series Book 2)

Aru Shah is only just getting the hang of this whole Pandava thing when the Otherworld goes into full panic mode. The god of love's bow and arrow have gone missing, and the thief isn't playing Cupid. Instead, the culprit is turning people into heartless fighting-machine zombies. And, as if that weren't bad enough, somehow Aru gets framed as the thief. If she doesn't find the weapon within ten days, she'll be kicked out of the Otherworld. Forever.

For better or worse, she won't be going it alone. Along with her soul-sister, Mini, Aru will team up with Brynne, an ultra-strong girl who knows more than she lets on, and Aiden, the boy who lives across the street and is also hiding plenty of secrets. Together they'll battle demons, travel through a glittering and dangerous serpent realm, and discover that their enemy isn't at all who they expected.

But Aru's biggest challenge may be in her own mind, where the words of the Sleeper still resonate: You were never meant to be a hero. . . . Will she be able to prove him wrong this time?

This second installment in the Pandava series has all the humor, action, and imagination that made Aru Shah and the End of Time sparkle. So tear open that packet of Oreos and pull up a chair.

• Amazon's Best of the Month for May's Middle Grade for 2019

Reviews:
"With rich descriptions of palaces and Otherworld lands, the colorful tapestry of Aru’s life engulfs readers, bringing them along for the experience and leaving them eager to find out what will happen next... This adventure throws readers into a magical world, with a lot of attitude on the side. A winning sequel with just as much appeal as Aru Shah and the End of Time."
—School Library Journal

"Chokshi seamlessly weaves Indian cosmology and pop culture into a refreshingly feminist plot laced with witty dialogue. The most compelling feature of the novel, however, is the complexity of its characters, who, despite their divinity or semidivinity, are at their core very human. This will leave fans enthralled and clamoring for more."
—Kirkus Reviews (starred)

"An entertaining ride filled with gods, goddesses, mythical creatures, and even a birthday celebration. Series fans will be thrilled to dive back into this rich and layered world."
—Jessica Anne Bratt, Booklist Review