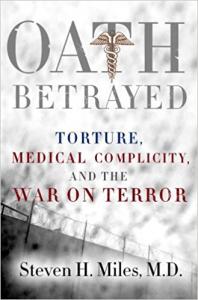 Oath Betrayed: Torture, Medical Complicity, And The War On Terror

“If law be the bedrock of civil society, it can no more undergird torture than it could support slavery or genocide.”
–from the Introduction

The graphic photographs of U.S. military personnel grinning over abused Arab and Muslim prisoners shocked the world community. That the United States was systematically torturing inmates at prisons run by its military and civilian leaders divided the nation and brought deep shame to many. When Steven H. Miles, an expert in medical ethics and an advocate for human rights, learned of the neglect, mistreatment, and torture of prisoners at Abu Ghraib, Guantánamo Bay, and elsewhere, one of his first thoughts was: “Where were the prison doctors while the abuses were taking place?”

In Oath Betrayed, Miles explains the answer to this question. Not only were doctors, nurses, and medics silent while prisoners were abused; physicians and psychologists provided information that helped determine how much and what kind of mistreatment could be delivered to detainees during interrogation. Additionally, these harsh examinations were monitored by health professionals operating under the purview of the U.S. military.

Miles has based this book on meticulous research and a wealth of resources, including unprecedented eyewitness accounts from actual victims of prison abuse, and more than thirty-five thousand pages of documentation acquired through provisions of the Freedom of Information Act: army criminal investigations, FBI notes on debriefings of prisoners, autopsy reports, and prisoners’ medical records. These documents tell a story markedly different from the official version of the truth, revealing involvement at every level of government, from Secretary of Defense Donald Rumsfeld to the Pentagon’s senior health officials to prison health-care personnel.

Oath Betrayed is not a denunciation of American military policy or of war in general, but of a profound betrayal of traditions that have shaped the medical corps of the United States armed forces and of America’s abdication of its leadership role in international human rights. This book is a vital document that will both open minds and reinvigorate Americans’ understanding of why human rights matter, so that we can reaffirm and fortify the rules for international civil society.

Reviews:
“This, quite simply, is the most devastating and detailed investigation into a question that has remained a no-no in the current debate on American torture in George Bush’s war on terror: the role of military physicians, nurses, and other medical personnel. Dr. Miles writes in a white rage, with great justification–but he lets the facts tell the story.”
—Seymour M. Hersh, author of Chain of Command


“Steven Miles has written exactly the book we require on medical complicity in torture. His admirable combination of scholarship and moral passion does great service to the medical profession and to our country.”
—Robert Jay Lifton, M.D., author of The Nazi Doctors: Medical Killing and the Psychology of Genocide, and co-editor of Crimes of War: Iraq