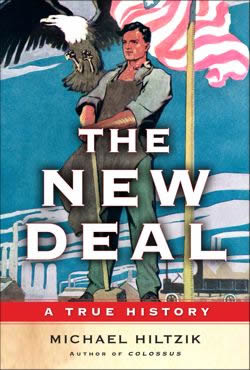 The New Deal: A True History

Franklin Roosevelt’s New Deal began as a program of short-term emergency relief measures and evolved into a truly transformative concept of the federal government’s role in Americans’ lives. More than an economic recovery plan, it was a reordering of the political system that continues to define America to this day.

With The New Deal: A Modern History, Pulitzer Prize–winning writer Michael Hiltzik offers fresh insights into this inflection point in the American experience. Here is an intimate look at the alchemy that allowed FDR to mold his multifaceted and contentious inner circle into a formidable political team. The New Deal: A Modern History shows how Roosevelt, through the force of his personality, commanded the loyalty of the rock-ribbed fiscal conservative Lewis Douglas and the radical agrarian Rexford Tugwell alike; of Harold Ickes and Harry Hopkins, one a curmudgeonly miser, the other a spendthrift idealist; of Henry Morgenthau, gentleman farmer of upstate New York; and of Frances Perkins, a prim social activist with her roots in Brahmin New England. Yet the same character traits that made him so supple and self-confident a leader would sow the seeds of the New Deal’s end, with a shocking surge of Rooseveltian misjudgments.

Understanding the New Deal may be more important today than at any time in the last eight decades. Conceived in response to a devastating financial crisis very similar to America’s most recent downturn—born of excessive speculation, indifferent regulation of banks and investment houses, and disproportionate corporate influence over the White House and Congress—the New Deal remade the country’s economic and political environment in six years of intensive experimentation. FDR had no effective model for fighting the worst economic downturn in his generation’s experience; but the New Deal has provided a model for subsequent presidents who faced challenging economic conditions, right up to the present. Hiltzik tells the story of how the New Deal was made, demonstrating that its precepts did not spring fully conceived from the mind of FDR—before or after he took office. From first to last the New Deal was a work in progress, a patchwork of often contradictory ideas. Far from reflecting solely progressive principles, the New Deal also accommodated such conservative goals as a balanced budget and the suspension of antitrust enforcement. Some programs that became part of the New Deal were borrowed from the Republican administration of Herbert Hoover; indeed, some of its most successful elements were enacted over FDR’s opposition.

In this bold reevaluation of a decisive moment in American history, Michael Hiltzik dispels decades of accumulated myths and misconceptions about the New Deal to capture with clarity and immediacy its origins, its legacy, and its genius.

Reviews:
“I can’t recommend it highly enough…really terrific, an energetically written and eminently readable history that makes all the right tradeoffs…you’re going to get all the high points, narrated with vigorous prose, a clear-sighted appreciation of just what motivated FDR and his allies, and a modern understanding of what they actually accomplished…a timely book."
—Mother Jones


“Franklin Roosevelt’s response to the Depression was an exercise in constant, messy improvisation, as Michael Hiltzik brilliantly shows in his new book."
—The Daily Beast


“[C]ould scarcely be more pertinent or timely…The New Deal had more acronyms than a James Bond novel and behind each was a huge personality…The author nails this rivalries enmity [between Ickes and Hopkins] with amused aplomb…Hiltzik gives a thrilling sense of this, the sweaty, seamy personal side of politics, and he conveys, too, one of history’s fundamental mysteries and fascinations.”
—Los Angeles Times


“Mr. Hiltzik seems to be aiming to do for FDR and his Brain Trust what Doris Kearns Goodwin did in 2005 for Abraham Lincoln and his cabinet in ‘Team of Rivals’…Mr. Hiltzik present the New Deal as an adventure made all the more thrilling by the uncertainty of its outcome.”
—Wall Street Journal