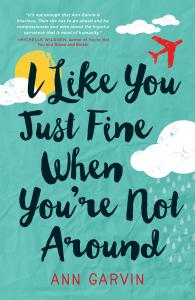 I Like You Just Fine When You're Not Around

Tig Monahan, radio therapist, finds out the hard way that nothing is fair in love and war...or family.

Everything is falling apart in psychologist, Tig Monahan's life. Her mother's dementia is wearing her out, her boyfriend takes off for Hawaii without her, and her sister inexplicably disappears leaving her newborn behind.

When a therapy session goes horribly wrong, Tig finds herself unemployed and part of the sandwich generation trying to take care of everyone and failing miserably. Just when she thinks she can redefine herself on the radio, as an arbiter of fairness, she discovers a family secret that nobody saw coming.

It will take everything plus a sense of humor to see her way clear to a better life, but none of that will happen if she can't let go of her past.


“Garvin’s wit and sensitivity keep her in full control of the emotional subject matter. Pinpoint details and realistic characterizations of Tig’s internal strife firmly situate readers in this eccentric, endearing story of a family coming together to face the ravages of Alzheimer’s.”
—Publishers Weekly

“It’s not enough that Ann Garvin is hilarious. Then she has to go ahead and be compassionate and wise about the hopeful car-wreck that is most of humanity. In I Like You Just Fine When You’re Not Around, Garvin builds an unorthodox family that’s both tight knit and forever at odds, and not one of those family members feels any less than rich, real, and complex–just what a novel needs.”
—Michelle Wildgen, author of You’re Not You and Bread and Butter

“Told with Garvin’s charming wit and propelled by mystery, I Like You Just Fine When You’re Not Around challenges our definition of family and love. A poignant and humor-filled look at those who care for everyone but themselves.”
—Kate Moretti, New York Times bestselling author of Thought I Knew You and Binds That Tie

“I Like You Just Fine When You’re Not Around captures the gritty truth of a family in crisis as the heartbreak of Alzheimer’s disease collides with caring for new life. Author Ann Garvin, writing with warmth and wisdom, explores sisters turning from piercing love to boiling rage and back again as they cope with the exhaustion of being the sandwiched generation.”
—Randy Susan Meyers, author of Accidents of Marriage