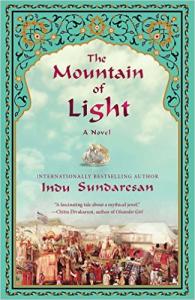 The Mountain Of Light

From the internationally bestselling author of The Twentieth Wife, a novel based on the tumultuous history of a legendary 186-carat diamond—originating in India—and the men and women who possessed it.

As empires rose and fell and mighty kings jostled for power, its glittering radiance never dimmed. It is the “Mountain of Light”—the Kohinoor diamond—and its facets reflect a sweeping story of love, adventure, conquest, and betrayal. Its origins are the stuff of myth, but for centuries this spectacular gem changes hands from one ruler to another in India, Persia, and Afghanistan. In 1850, the ancient stone is sent halfway around the world where it will play a pivotal role in the intertwined destinies of a boy-king of India and a young queen of England—a queen who claims the Mountain of Light and India itself for her own burgeoning empire, the most brilliant jewels in her imperial crown.

The Mountain of Light is a magnificent story of loss and recovery, sweeping change and enduring truth, wrapped around the glowing heart of one of the world’s most famous diamonds.


“Sundaresan tells the fascinating story of how the diamond travels from the hands of the king of Afghanistan to the arm of Queen Victoria during the early years of India’s colonization by the British. […] With a strong eye for detail and a great talent for dramatization, Sundaresan has composed an epic tale of a coveted jewel and its place in India’s rich history.”
—Booklist


“Indu Sundaresan has written a fascinating novel about a fascinating time, and has brought it alive with characters that are at once human and legendary, that move with grace and panache across the brilliant stage she has reconstructed for them.”
—Chitra Divakaruni


“This epic tale of the seventeenth-century Moghul empress Nur Jahan before her marriage is informative, convincing, and madly entertaining.  The reader comes away with an unexpected vision of the power behind the veil.”
—Marilyn Yalom, author of A History of the Wife and A History of the Breast.


“Like Anchee Min’s splendid historical novel Becoming Madame Mao, Indu Sundaresan’s fictional debut focuses on a strong woman who challenged the rigid conventions of her time, someone whose rise to power was fraught with drama and controversy…a fascinating subject…There is no question that Sundaresan is a gifted storyteller with an obvious passion for history.”
—USA Today


“Sundaresan writes in the great tradition of the Indian epic, an art she carries forward with grace and brilliance…a remarkably readable book...Highly recommended.”
—Library Journal


“Indu has created a wonderful, sweeping story of love, betrayal and the building of the Taj Mahal.”
—Publishers Weekly