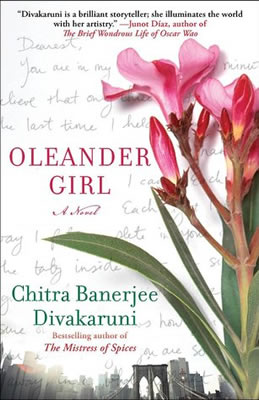 From the bestselling author of One Amazing Thing, a sweeping, suspenseful, atmospheric coming-of-age novel about a young woman who leaves India for America on a search that will transform her life.

Beloved by critics and readers, Chitra Banerjee Divakaruni has been hailed by Junot Diaz as a "brilliant storyteller" and by People magazine as a "skilled cartographer of the heart". Now, Divakaruni returns with her most gripping novel yet.

Orphaned at birth, seventeen-year-old Korobi Roy is the scion of a distinguished Kolkata family and has enjoyed a privileged, sheltered childhood with her adoring grandparents. But she is troubled by the silence that surrounds her parents' death and clings fiercely to her only inheritance from them: the love note she found hidden in her mother's book of poetry. Korobi dreams of one day finding a love as powerful as her parents', and it seems her wish has come true when she meets the charming Rajat, the only son of a high-profile business family.

But shortly after their engagement, a heart attack kills Korobi's grandfather, revealing serious financial problems and a devastating secret about Korobi's past. Shattered by this discovery and by her grandparents' betrayal, Korobi undertakes a courageous search across post 9/11 America to find her true identity. Her dramatic, often startling journey will, ultimately, thrust her into the most difficult decision of her life.

Chosen for "One Book" programs in: Gulf Coast Reads; The cities of Alliance, OH; Georgetown and Richardson, TX.

Chosen as one of Oprah's New Books to Get Lost In.

Reviews:
“Divakaruni’s descriptive, evocative writing makes you race through the book and then mourn its completion…her mastery of penning characters and situations stir one’s emotions as she…maps the delemmas of heritage and lineage…For those who are fans of the author, this is a must-read. For those who have yet to discover her, this book is a must.”
—People Magazine India


“For those of us who read to escape the banalities of daily life, Chitra Divakaruni’s books are oxygen. She writes about India in a way that makes the rest of the world disappear around you.”
—Chicago Tribune


"Oleander Girl is a coming of age novel in the best tradition, with a heroine who is both infuriating and endearing, and most importantly, brave… Divakaruni’s gift is story telling, and she is generous with her gift. Through her wonderful novel Oleander Girl, we become active participants… and grateful witnesses to the maturing of a child into a woman.”
—Huffington Post


“Chitra Divakaruni’s enthralling new novel, Oleander Girl, tells a love story that is more than just that… The many memorable characters that people this novel make it a pleasure to read… [Divakaruni] lavishes as much care on secondary characters… as she does on the principals… Divakaruni’s tale is so well-plotted that few will guess the secrets at the heart of this page-turner.”
—Dallas News


“Korobi is the title character of Oleander Girl, but in telling her story, Chitra Banerjee Divakaruni (One Amazing Thing) also explores the stories of those around her, and the intersections and overlaps of those stories make this novel engrossing reading… Divakaruni explores issues of class and politics in modern India and immigrant America, but the family issues at the heart of the novel give it a cross-cultural appeal. Told with empathy and intelligence, and accompanied by intrigue, the stories—and issues—of the Roy and Bose families should appeal to a broad range of readers.”
—Shelf Awareness


“Divakaruni’s new novel, Oleander Girl, is a showcase for the best-selling author’s ability to maintain her signature, beautifully-crafted prose while creating a complex set of deceptions, ruses, and lies, exposing the dark side of human nature. Twists and turns, suspense and revelations are plentiful, resultin gin a novel that cautions the reader to expect the unexpected, for the easy road is never the one taken.”
—India Currents


“The first chapter of Oleander Girl is a masterpiece – a Dickens novel moved forward 150 years to post-9/11 2002 and eastward 5,000 miles to Kolkata, India… Rereading the opening pages just reaffirms how beautifully Divakaruni creates a solid framework for the entire story laced with lush, exotic detail.”
—Bookreporter


“Divakaruni uses her considerable storytelling skills to full advantage in her new novel.”
—The Oregonian


“Divakaruni, who has examined the lives of Indian women living in the United States in works like Arranged Marriage and Mistress of Spices, introduces a cast of characters who defy their stereotypes... Exploring the United States and India in the aftermath of the September 11 attacks, Divakaruni has crafted a beautiful, complex story in which, caste, class, religion, and race are significant factors informing people’s world views.”
—Library Journal (starred)


“Set against the social, economic and political tensions in India and the U.S., Oleander Girl not only forces characters to question the beliefs and preconceptions they have grown up with, it also analyzes the importance of love and the many ways it helps us survive the brutal and hateful world of today.” “An accomplished storyteller, Divakaruni creates a well-plotted and charming, yet hard-hitting novel where love, loss and secrets collide.” “A thrilling page turner, the characters, who are well-crafted, draw one’s sympathy to them.”
—The Indian American


“Oleander Girl is elegant and classic, but also vivid and immediate. Love and loss and secrets collide in this powerful story of the way we live now.  There is poetry on these pages, but also the burning-on-both-ends urgency of a page turner. Gorgeous and exciting, this is a wonderful novel.”
—Tayari Jones, author of Silver Sparrow


“When you think of thrilling page turners, you don’t usually think of fluid, graceful prose. But that’s what you’ll find in Oleander Girl. This is the gripping story of a young woman who leaves India in search of her father in America, only to learn far more about herself than she bargained for. It is also a story that bears out the wisdom of something one of the characters says: Never choose something because it’s easier. Chitra Divakaruni is such an elegant writer, one who makes the reader feel not only engaged and entertained, but a bit elevated, too. I’ve been a fan of Chitra Divakaruni’s work for a long time; this book keeps me one.”
—Elizabeth Berg, author of Tapestry of Fortunes


“Oleander Girl is a riveting and powerful exploration of family secrets, betrayal, love, and ultimately, the search for self. Divakaruni paints colorful characters on a rich tapestry of modern India, all still haunted by the past.”
–Shilpi Somaya Gowda, New York Times bestselling author of Secret Daughter


“Compulsively readable, a real page-turner. I found it impossible to set this novel down once I picked it up. Chitra Divakaruni confronts the hard truths about love, loss, grief, redemption and the choices we make, in a family saga that reads like a detective novel.”
—Thrity Umrigar, bestselling author of The World We Found and The Space Between Us