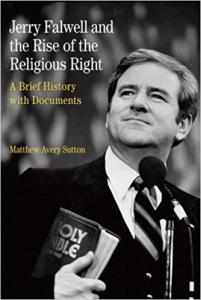 Jerry Falwell And The Rise Of The Religious Right: A Brief History With Documents

As one of the most media-savvy ministers in U.S. history, Jerry Falwell figured prominently in the political mobilization of religious conservatives in the 1970s and early 1980s. Falwell’s life and work touched on almost all of the major issues of the time period: the cold war, changing gender roles, civil rights, the revitalization of American conservatism, and the Reagan revolution. In his introductory essay, Matthew Avery Sutton traces Falwell’s politicization and rise to celebrity status, using Falwell as a lens through which to view the larger movement. More than two dozen primary documents focus on the Religious Right’s emergence in the 1970s as a powerful political force and present students with first-hand accounts of the era’s culture wars. The thematically arranged documents – including sermons, letters, speeches, interviews, court documents, and children’s books – provide an up-close look at the motivations and aspirations of the Religious Right. Photographs, document headnotes, a chronology, questions for consideration, and a selected bibliography provide additional pedagogical support.