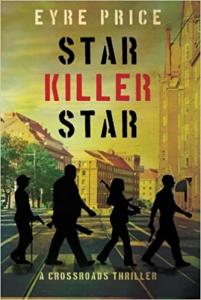 So many bright, young music stars lost too soon. Tragic consequences of the pop-rock lifestyle or calculated casualties of a far more sinister plot?

Sent on a mission by the mysterious Mr. Atibon to discover who really killed Jimi Hendrix, Daniel Erickson uncovers a conspiracy that reaches the highest government offices and corporate boardrooms. When devilish music promoter Haden Koschei sets his sights on a new pair of victims, Daniel’s quest gets personal, as he and his hit man friend, Moog, race down the highway to hell to save their loved ones. It’s a long and winding road, beset with maniacal FBI agents, corporate commandos, and crazed Mexican drug lords. Before Daniel can make it to the big finale, he must first face his own destiny. Star Killer Star is a smart, fast-paced thriller that asks: If fame is power, who controls it? And what are they using it for?