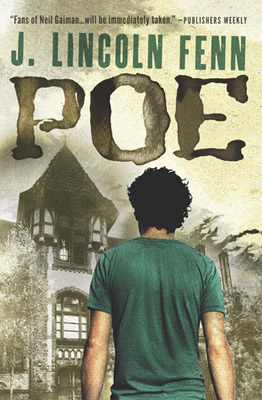 It's Halloween, and life is grim for 23-year-old Dimitri Petrov. It's the one-year anniversary of his parents' deaths, he's stuck on page one thousand of his Rasputin zombie novel, and he makes his living writing obituaries.

But things turn from bleak to terrifying when Dimitri gets a last-minute assignment to cover a seance at the reputedly haunted Aspinwall Mansion.

There, Dimitri meets Lisa, a punk-rock drummer he falls hard for. But just as he's about to ask her out, he unwittingly unleashes malevolent forces, throwing him into a deadly mystery. When Dimitri wakes up, he is in the morgue, icy cold and haunted by a cryptic warning given by a tantalizing female spirit.

As town residents begin to turn up gruesomely murdered, Dimitri must play detective in his own story and unravel the connections among his family, the Aspinwall Mansion, the female spirit, and the secrets held in a pair of crumbling antiquarian books. If he doesn't, it's quite possible Lisa will be the next victim.

Reviews:
"A delightful, bravura piece of gothic pop…fans of Neil Gaiman and [Buffy the Vampire Slayer] will be immediately taken, but there’s a literate edge to the pyrotechnics that makes for an unlikely and welcome marriage between the spook story and literature of altogether less ectoplasmic substance."
—Publisher's Weekly


"Hitting the high notes of multiple genres, her talent is wicked raw and proudly untamed. This is Fenn’s first novel [and] I can’t wait to see what comes next."
—Bloody-Disgusting.com


"J. Lincoln Fenn’s Poe is a shining display of humorous morbid entertainment. With a thrilling mystery, Fenn takes dark themes and gives us a witty novel with ties to history and magic. Suspense and intrigue are the name of the game and Fenn mixes this nicely with her light writing style...It isn’t pretentious but instead a true 'come as you are' novel, even if you may be a bit odd or quirky."
—Literary Escapism


"Fenn mixes horror and comedy very well. Usually when those two get stirred together, one overpowers the other. That doesn’t happen in this novel. When you’re supposed to laugh, you’ll bust a gut. And when you’re supposed to be frightened or leery, you’ll hold on, scarcely breathing, to see if everyone emerges alive."
—Bookhound


"Overall, I was basically bowled over by Poe...The novel jumps into my own top five of my best novels of 2013 and is nipping at the heels of number one. I highly recommend this to anyone who likes great well-paced fiction."
—The Novel Pursuit