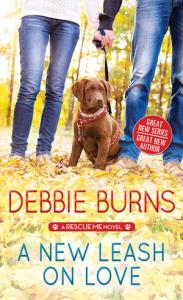 A New Leash on Love: A Rescue Me Novel

Despite his highly successful marketing career, Craig Williams’ personal life is falling apart. The puppy he’s surrendering to the local shelter is one sign of how messed up things have gotten due to a recent divorce plus the loss of a child. He thinks he’d best focus on his two surviving kids.

When Craig shows up to Megan Anderson’s non-kill animal shelter, the confrontation that ensues sets them on a path neither could have predicted. As they begin spending time together, Megan starts to wonder if Craig’s baggage is too much. But soon she’ll have to make a choice that could bind them together forever…or drive them farther apart than the day they met.


"This is a carefully plotted book with characters who play to type, including all the children involved as well as the parents... It’s a good one to sink into for a beach read."
—USA TODAY Happily Ever After


"Meg and Craig’s relationship builds slowly, giving her a chance to develop strong relationships with Sophie and her surviving brother, Reese. Pet lovers will adore all the animals introduced in Burns’ sweet romance, the opening title in her Rescue Me series."
—Booklist


"Craig Williams and Megan Anderson may — at first glance — seem an unlikely pair, but their chemistry is off the charts! Sexy and fun, they prove to be an irresistible match, with layers and depth of emotion. And they aren’t the only ones falling in love. Craig’s teenage daughter is head over heels for the endearing (and often quirky) animals that pass through Megan’s no-kill animal rescue shelter, and readers will be, too! Wounded souls of all shapes and sizes, human and animal alike, tug at the heartstrings and evoke the right blend of tears as well as laughter."
—RT Book Reviews