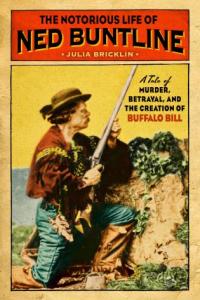 The Notorious Life of Ned Buntline: A Tale of Murder, Betrayal, and the Creation of Buffalo Bill

Edward Zane Carroll Judson aka Ned Buntline (1821–1886) was responsible for creating a highly romantic and often misleading image of the American West, albeit one that the masses found irresistible in the mid-to-late nineteenth century. Some scholars estimate that he wrote at least four hundred dime novels over his lifetime, and perhaps as many as six hundred. While he is best known for discovering William Frederick Cody (Buffalo Bill) and making the irrepressible scout a star, Judson—by that time—had already lived five lifetimes himself: he had fought Seminole Indians in Florida; started and bankrupted three newspapers; published dozens of successful novels; agitated for the Know-Nothing party; and fought in the Union Army during the Civil War. Along the way, the fiery redheaded, gray-eyed writer lectured extensively about temperance between drinking bouts. He married eight women, seduced at least one other, and cavorted with prostitutes, one of whom beat him physically and legally.

It wasn’t until 1869 that, en route home from a temperance speaking tour in California, he met Cody in Nebraska, while trying to make contact with another Western star, “Wild Bill” Hickok. Judson’s time with his last three wives overlapped his time with Cody. Their subsequent fight over Judson’s Civil War pension provides not only a unique glimpse into the mind of a narcissistic genius, but also a panoramic view of America’s past forcibly displayed by white, Protestant manhood.

The Notorious Life of Ned Buntline captures the likeness of a man whose life was a landscape littered with contradictions--a man whose readers often forgave his Jekyll-and-Hyde behavior because of his inventive portrayal of a country trying to subdue the last of its natural landscapes and make sense of its teeming cities. It will be, at last, an open-eyed look at the man who sparked an American legend but whose own scandalous life somehow escaped history's limelight.


"Julia Bricklin’s well-written biography reintroduces readers to Edward Zane Carroll Judson, popularly known by the pen name “Ned Buntline.” This lively narrative details the life and exploits of a bigamist, an imbibing temperance speaker, a rioter, a politician, and a famed raconteur who popularized legendary western heroes like Buffalo Bill through his sensational dime novels. Bricklin reveals that in many cases, Ned Buntline led a life that no dime novelist could fictionalize."