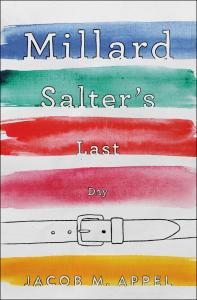 In the spirit of the New York Times bestselling A Man Called Ove, this is the heartwarming story of a man who decides to end his life before he’s too old—but then begins to reconsider when he faces complications from the world around him.

In an effort to delay the frailty and isolation that comes with old age, psychiatrist Millard Salter decides to kill himself by the end of the day—but first he has to tie up some loose ends. These include a tête-à-tête with his youngest son, Lysander, who at forty-three has yet to hold down a paying job; an unscheduled rendezvous with his first wife, Carol, whom he hasn’t seen in twenty-seven years; and a brief visit to the grave of his second wife, Isabelle. Complicating this plan though is Delilah, the widow with whom he has fallen in love in the past few months. As Millard begins to wrap up his life, he confronts a lifetime of challenges during a single day—and discovers that his family has a big surprise for him as well.


"[A] winning novel...our protagonist can be exceedingly comical, careening from innermost stream of consciousness to conversations with workday hospital colleagues to quirky, lovable family and friends....Millard calls up comparisons to the late John Updike's visited and revisited character, Rabbit."
—Associated Press


“Delving into the topic of mortality with an artful blend of humor and introspection, this unique novel captures the unexpected perspective of embracing life and death simultaneously.”
—RT Book Review