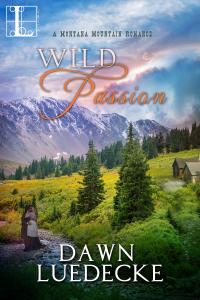 One of the last outposts of the American West, the Montana Territory is filled with promise and adventure for those with brave souls—and open hearts . . .

Leader of the Timberbeasts, logger Simon Sanders’ biggest problem a year ago was deciding which willing woman to seduce. But since being mauled by a cougar he’s become a pariah in Missoula’s social circuit—and to himself. All he wants is to hide his scarred face and disappear into the bottom of a whiskey bottle. His plan is going well—until his sister’s best friend, Carrie Lane, kidnaps him and forces him to deal with his demons. If he didn’t know better, Simon would swear the bossy beauty is a demon herself . . .

Carrie doesn’t like to use the word kidnap. Unknowingly transport, perhaps. In any case, she can no longer watch Simon destroy himself in self-pity. Not since she lost her heart to him as she nursed him back to health. Now, whatever happens between them, she’s determined to bring him back to the one place he swore he’d never return to, the place she’s sure will reignite his spirit. But if things go awry, will she will she lose all hope for him to win back his life—much less share it with her? . . .