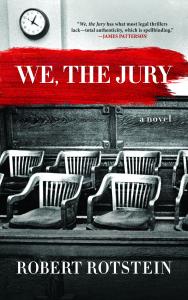 Told from the perspective of over a dozen participants in a murder trial, We, the Jury examines how public perception can mask the ghastliest nightmares. On the day before his twenty-first wedding anniversary, David Sullinger buried an ax in his wife's skull. Now, eight jurors must retire to the deliberation room and decide whether David committed premeditated murder--or whether he was a battered spouse who killed his wife in self-defense.

The path to justice is fraught with surprising pitfalls and confusing turns. An experienced, fair-minded judge mistakenly tells the jury that David is guilty and fears she's losing her mind. The bailiff, once a decorated street cop but now a pariah in the sheriff's department, must fend off the sexual advances of an amoral juror. An unscrupulous tabloid reporter tries to tamper with the justice system.

Once inside the deliberation room, the jurors elect as foreperson an insecure, addled file clerk, who gets the job because no one else wants it. Despite -- or perhaps because of -- her delusions of grandeur, she loses control of the deliberations, allowing a juror known as the Housewife to monopolize the discussion. A buttoned-up jury consultant uses her professional experience to challenge her colleagues' preconceived notions about the evidence. An apparently sweet grandmother turns out to be anything but. A Methodist minister sits silently, concealing a shocking secret that could change everything.

As the jurors stagger toward a verdict, they must sift through contradictory testimony from the Sullinger's children, who disagree on which parent was Satan; sort out conflicting allegations of severe physical abuse, adultery, and incest; and overcome personal animosities that threaten a fair and just verdict. Ultimately, the central figures in We, the Jury must navigate the blurred boundaries between bias and objectivity, fiction and truth.


“We the Jury has what most legal thrillers lack—total authenticity, which is spellbinding.”
—James Patterson


"A gripping novel, We the Jury offers an inside look into the judicial system and how each character reacts to a legal situation."
—New York Journal of Books


"Readers will be riveted right up to the end. Highly recommended for fans of legal thrillers by authors such as John Grisham, Michael Connelly, and Scott Turow."
—Library Journal