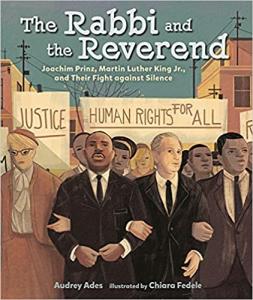 The Rabbi and the Reverend: Joachim Prinz, Martin Luther King Jr., and Their Fight against Silence

When Dr. Martin Luther King Jr. gave his “I Have a Dream” speech at the March on Washington, he did not stand alone. He was joined by Rabbi Joachim Prinz, a refugee from Nazi Germany, who also addressed the crowd. Though Rabbi Prinz and Dr. King came from very different backgrounds, they were united by a shared belief in justice. And they knew that remaining silent in the face of injustice was wrong. Together, they spoke up and fought for a better future.


“Ades’ book is a timely corrective to the often strained relations between America’s Jewish and Black communities. The back matter (a timeline of King’s and Prinz’s lives, a glossary, and suggested readings) fleshes out the history for curious adults or older readers. We need more books at a middle school and YA level that explore the extensive collaboration between Jews and Blacks in the civil rights movement."

"Ades’s prose is affecting and effective in its directness: “In Germany, he had seen what could happen when people stood by while their neighbors suffered.” Fedele’s art evokes paintings and line drawings in a retro palette, offering a rich complement to this striking narrative of interfaith, cross-cultural support for equality."