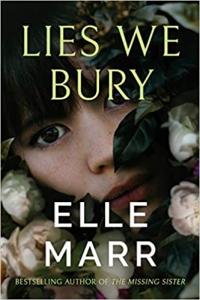 A novel about secrets and revenge by the number one Amazon Charts bestselling author of The Missing Sister. It’s only by confronting who she was then that she can understand who she is now.

I was born in captivity…

Two decades ago Marissa Mo escaped a basement prison—the only home she’d ever known. At twenty-seven, Marissa’s moved beyond the trauma and is working under a new name as a freelance photographer. But when she accepts a job covering a string of macabre murders in Portland, it’s impossible for Marissa not to remember.

Everything is eerily familiar. The same underground lairs. Sad trinkets and toys left behind, identical to those Marissa had as a child. And then there is the note meant just for her that freezes Marissa’s blood: See you soon, Missy.

To determine the killer’s next move, Marissa must retrieve her long-forgotten memories and return to a past she’s hidden away. But she won’t be facing her fears alone. Someone is waiting for her in the dark.


“A clever, twisty murder mystery packed full of secrets and lies that will keep you turning the pages way past bedtime. LIES WE BURY hooked me from page one and kept me guessing until its dramatic conclusion.”

“A twisted mashup of Room and a murder mystery, Marr’s Lies We Bury is a story that creeps into your bones, a sneaky tale about the danger of secrets and the power the past holds to lead us into a deliciously devious present. Say goodbye to sleep and read it like I did, in one breathless sitting.”

-- Kimberly Belle, internationally bestselling author of Dear Wife and Stranger in the Lake

"Dark and compelling, Elle Marr has written another atmospheric and twisted thriller that you don't want to miss. LIES WE BURY delves into the darkest of pasts and explores the fascinating tension between moving on and revenge. This is a fly-through-the-pages thriller."

--Vanessa Lillie, Amazon Bestselling author of LITTLE VOICES and FOR THE BEST

“The suspenseful plot is matched by the convincing portrayal of the vulnerable Claire, who just wants to lead a normal life. Marr is a writer to watch.” --Publishers Weekly

“Lies We Bury is dark and compelling, and it will pull you into its web right from page one. Marr’s writing is addictive and page-turning, and I was so invested in the outcome, that I did not want to put this one down.” – Erin Clemence, Mystery and Suspense magazine

“[Elle Marr] has a very engaging style of writing that instantly drew me into the narrative and has deftly created extremely complex characters that never become unbelievable in any way. The plot is well-handled right through the satisfying ending.”- Ray Palen, Criminal Element