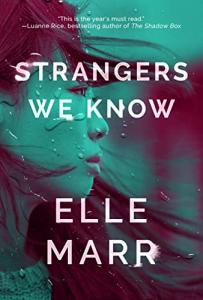 The search for a serial killer leads a woman into the twisted tangle of her own family tree in a chilling novel by the #1 Amazon Charts bestselling author of The Missing Sister and Lies We Bury.

Adopted when she was only days old, Ivy Hon knows little about her lineage. But when she’s stricken with a mystery illness, the results of a genetic test to identify the cause attract the FBI. According to Ivy’s DNA, she’s related to the Full Moon Killer, who has terrorized the Pacific Northwest for decades. Ivy is the FBI’s hope to stop the enigmatic predator from killing again.

When an online search connects Ivy with her younger cousin, she heads to rural Rock Island, Washington, to meet the woman. Motivated by a secret desire to unmask a murderous relative, Ivy reaches out to what’s left of a family of strangers.

Discovering her mother’s tragic fate and her father’s disappearance is just the beginning. As Ivy ventures into a serial killer’s home territory, she realizes that she may be the next victim of poisonous blood ties.

“Elle Marr is an author to know. Just when you think you understand the motives behind her characters and the way their story lines are being presented—bam!—Elle will hit you with twists you won’t see coming. Told from multiple points of view, Strangers We Know is about more than Ivy learning of her past and, shockingly, the serial killer within her family; it’s also about knowing who to trust and how to discern who’s telling the complete story. Because if everyone has secrets, are they truly family or only strangers? Read Strangers We Know to find out.” ?Georgina Cross, bestselling author of The Stepdaughter

“Elle Marr burst onto the suspense scene in 2020 with her bestselling debut, The Missing Sister, and followed up a year later with Lies We Bury, another trust-no-one murder mystery. With her third novel, Strangers We Know, Marr firmly establishes herself as a master of ‘did that really just happen?’ thrillers. Strangers We Know has plot twists so unexpected and characters so creepy you won’t want to turn out the lights, and the ending is surprising in multiple ways. Who knew a deranged-serial-killer whodunit could leave you with all the feels?”  ?A.H. Kim, author of A Good Family

“Dark family secrets, serial murder, and a cult? Yes, please. Twisty and a little twisted, the highly addictive and surprise-packed Strangers We Know will have you pulling an all-nighter.” ?Heather Chavez, author of No Bad Deed

“From the first page I was gripped by Strangers We Know and read through the night till the end. The novel is thrilling beyond belief, with suspense and twists ratcheting up on each page. Elle Marr is brilliant at delving into the darkness of a seemingly normal family, and by the time she pulls back the curtains on each character, the terror has built so excruciatingly, you just have to keep going till you find out every single thing—you’re afraid to know, but you have to know. This is the year’s must read.” ?Luanne Rice, bestselling author of The Shadow Box