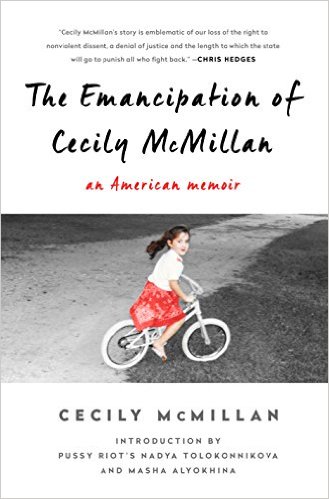 The Emancipation of Cecily McMillan is the intimate, brave, bittersweet memoir of a remarkable young millennial, chronicling her journey from her trailer park home in Southeast Texas, her loving family broken up by poverty and mental health issues, her emancipation from her parents as a teenager, when she went to live with one of her teachers in a black neighborhood in Atlanta, through graduate school, to a pivotal night in Zuccotti Park, her ordeal at New York's most notorious prison, and ending back in Atlanta, where she lives now.

One of the most iconic images of the Occupy Wall Street protests is a nighttime shot of a slightly disheveled young woman, dressed in bright yellow and green for St. Patrick's Day, running, curly hair flying, mouth open mid-gasp as a grimacing cop in uniform reaches out to grab her from behind. That woman was Cecily McMillan. Soon after the picture was taken, she was arrested. After enduring a Kafkaesque trial, and in spite of public outcry, she was convicted of second-degree assault of an officer and sent to Rikers Island, where she spent 58 days.

Cecily was politicized at a very young ageleading walkouts against the Iraq war in high school and joining the uprising against Scott Walker in Wisconsin during college. When she moved to New York for a masters at the New School, she got involved in Occupy Wall Street, but she was deeply skeptical of the movement and the night of her arrest she was only there to meet some friends who wanted to celebrate St. Patrick's Day. At Rikers, Cecily was reminded of where she came from and who it was she was fighting for. Upon her release from prison, she immediately began to give voice to the concerns of her fellow prisoners, women of color with precarious lives who had taken her under their wings and taught her how to navigate life in prison. She then moved to Atlanta where she resumed her work as a vibrant organizer, and currently helps organize Moral Mondays Atlanta, all while remaining a strong voice for prison reform and working to appeal her verdict.

Unwittingly thrust into the limelight with her arrest, Cecily has proven herself to be a sophisticated political thinker, a charismatic public figure, dedicated activist, and voice of her generation. As she told Mother Jones upon her arrest: "to me [activism] isn't political so much as personal. It's whatever I can do to make life better."