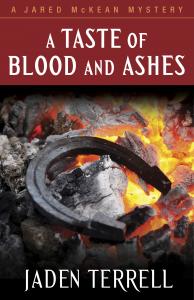 A Taste of Blood and Ashes: A Jared McKean Mystery

When Nashville PI and horse whisperer Jared McKean is hired to investigate a suspicious barn fire, he finds evidence of soring, the practice of using painful shoeing or caustic chemicals to affect the gait of a Tennessee Walking Horse. But the owners, Zane and Carlin Underwood, are known anti-soring activists. Carlin's distress seems genuine, and Zane is confined to a wheelchair, paralyzed from the chest down during an attack by a frenzied stallion. Jared believes someone else is behind the arson.

One thing is for certain, Alfie's killers are about to know what it means to murder a friend of Sam, former corporate troubleshooter, former professional boxer and all-around ornery bull dog, and Jackie, a defense lawyer often described as an avenging angel.

Knowing the arsonist is almost certainly someone in community of those who breed and show Walking Horses, Jared and his new assistant, his half-sister Khanh, attend a local horse show in hopes of flushing out the culprit. There are suspects aplenty, including a groom on the run from a powerful cartel, a modern day robber baron, and a beautiful gold-digger whose dreams are filled with fire.

Secrets pile on top of secrets, and as Zane's memories of the events leading to his accident begin to return, the situation becomes deadly. Jared and Khanh find themselves in the crosshairs of a killer who will do anything to keep the past in the past.

Reviews:
"After a tense prologue, Terrell settles into a relaxed rhythm that allows all the complications you'd want from a 40-year-old conspiracy without ever breaking a sweat."
—Kirkus Reviews