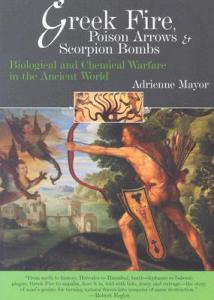 Weapons of biological and chemical warfare have been in use for thousands of years, and Greek Fire, Poison Arrows & Scorpion Bombs, Adrienne Mayor's exploration of the origins of controversial weaponry, draws extraordinary connections between the mythical worlds of Hercules and the Trojan War, the accounts of Herodotus and Thucydides, and modern methods of war and terrorism.Drawing on sources ancient and modern, Mayor describes ancient recipes for arrow poisons, booby traps rigged with plague, petroleum-based combustibles, choking gases, and the deployment of dangerous animals and venomous snakes and insects. She also explores the ambiguous moral implications inherent in this kind of warfare: Are these nefarious forms of weaponry ingenious or cowardly? Admirable or reprehensible?

Reviews:
"[This] highly informative volume narrates the long pretechnological history of the use of poisons and fire in warfare...[Greek Fire is] absolutely absorbing, if macabre, and a formidable source on classical warfare, with bibliography, illustrations and annotations to serve further research."
—Publisher's Weekly