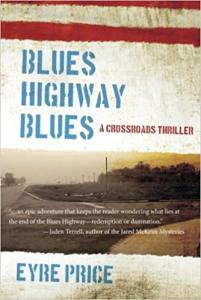 Winner of the Best Book of the Year awarded by Blues411

Music mogul Daniel Erickson’s life has come to a perilous crossroads. Literally. He has a ruthless pair of killers on his tail and is chasing a million dollars that he owes a Russian mobster.

Standing along the same Mississippi highway where legend claims that bluesman Robert Johnson traded his immortal soul for matchless command of the guitar, Daniel finds himself on a path that parallels the evolution of American music from the Mississippi Delta to New Orleans and on to Memphis, Nashville, Chicago, Detroit, Cleveland, Philadelphia, the Jersey Shore, New York, and Seattle.

At every stop, Daniel’s tour gets more dangerous with the hit men closing in, an FBI agent obsessed with his capture, and a rogue motorcycle gang hunting him down. Blues Highway Blues, Eyre Price’s debut novel, is a compelling and unique combination: part edge-of-your-seat road trip across America and part examination of the music that comprises its soundtrack.


"Like a Muscle Shoals guitar lick that you can't get out of your head, Eyre Price has penned a debut novel that you can't put down. You'll want to go down to the crossroads to finish Blues Highway Blues." Rick Robinson, Grand Prize Winner at the London Book Festival for Writ of Mandamus

"Eyre Price deftly weaves page-turning action, suspense, and humor into a top-notch primer on the history of modern American music. As a music lover and reverent fan of great story-telling, I thoroughly enjoyed the Blues Highway Blues thrill-ride, all the way through.”-Laura Roppé, award-winning singer-songwriter and author of Rocking the Pink

“By turns heartbreaking, funny, and terrifying, Blues Highway Blues tells the story of a jaded music promoter whose fate is tied to a sadistic Russian mobster, a pair of mismatched hit men, and a mysterious old bluesman who is more than he seems. With pitch-perfect prose, Eyre Price weaves humor, horror, and a touch of magic into an epic adventure that keeps the reader wondering what lies at the end of the Blues Highway—redemption or damnation?” – Jaden Terrell, author of the Jared McKean mysteries