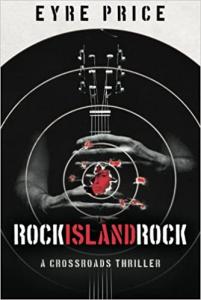 Rock Island Rock is the pulse-pounding second act in the evolution of the Crossroads series, which began with Blues Highway Blues, voted Best Blues Book of 2012 by Blues411.com.

Owing a debt to the mysterious bluesman, Mr. Atibon, reluctant hero Daniel Erickson finds himself back on the run with his lady love, Vicki Bean, and hitman friend, Moog Turner. Now the three are racing to track down the killer of a rock and roll superstar. They travel a violent and dangerous road, littered with obsessive FBI agents, vengeful Russian mobsters, brutal cartel assassins, and psychotic biker gangs. But no matter how fast and far Daniel and company run, there’s no escaping the blood they’ve spilled—and an unspeakable evil waiting for them.


"Price has proven he is more than a one-hit wonder. All the while he is weaving the lyrics of a novelist's song, he draws the reader into a world of rock and roll and supernatural intrigue. Eyre Price is rock fiction's front man." --Rick Robinson, award-winning, international best selling author of Alligator Alley

"Rock Island Rock is a gripping thriller, as raw and compelling as the music that underscores its pages." --Melinda Leigh, best selling author of Midnight Sacrifice

"With Rock Island Rock, Eyre Price lets us know that he's here to stay. The Crossroads series is destined for big things... Price weaves his story into the heart of America and her music and tells it like it is. Fast-paced, with a dark sense of humor and characters who remind me of many people I have known, make it unputdownable. Rock Island Rock will knock you out." --Robert Pobi, international best-selling author of Bloodman and Manheim Rex.

"Mesmerizing and original, Rock Island Rock, perfectly blends lyrical prose, Elmore Leonard-like grit, and a dose of the supernatural in this tale of a music man who’s done some bad, bad things. It’s a mystery, a story of good versus evil, and a love letter to rock and roll. Eyre Price is one of the best new voices in the genre." --Anthony J. Franze, author of The Last Justice

"Price moves the reader at a blazing pace through Daniel Erickson's frenetic world, a world punctuated by violence, desperation, crime, and redemption. Poured over all this is the soul of rock and roll, which gives the story its truly original flavor. Kudos to Price for this literary rock opera." --Carter Wilson, author of Final Crossing