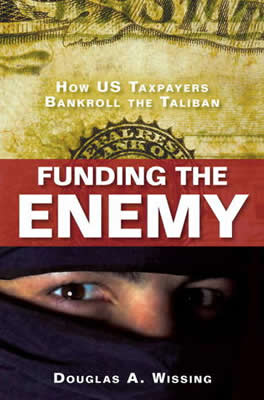 Funding the Enemy: How U.S. Taxpayers Bankroll the Taliban

With the vague intention of winning hearts and minds in Afghanistan, the US government has mismanaged billions of development and logistics dollars, bolstered the drug trade, and dumped untold millions into Taliban hands. That is the sobering message of this scathing critique of our war effort in Afghanistan.

According to this book, America has already lost the war. While conducting extensive research and fieldwork in Afghanistan's war zones, a drumbeat of off-the-record and offhand remarks pointed the author to one conclusion: "We blew it." The sentiment was even blazoned across a US military fortification, as the author saw at Forward Operating Base Mehtar Lam in insurgency-wracked Laghman Province: "I glanced over at a concrete blast barrier while waiting for a helicopter," Wissing says. "Someone had spray-painted in jagged letters: 'The GAME. You Lost It.'"

The author's vivid narrative takes the reader down to ground level in frontline Afghanistan. It draws on the voices of hundreds of combat soldiers, ordinary Afghans, private contractors, aid workers, international consultants, and government officials. From these contacts it became glaringly clear, as the author details, that American taxpayer dollars have been flowing into Taliban coffers, courtesy of scandalously mismanaged US development and counterinsurgency programs, with calamitous military and social consequences.

This is the first book to detail the toxic embrace of American policymakers and careerists, Afghan kleptocrats, and the opportunistic Taliban. The result? US taxpayers have been footing the bill for both sides of a disastrous Afghanistan war.

Reviews:
“One of the most candid behind-the-scenes examples of Afghan War reportage, this book contains a host of voices that spell out the chaos and mayhem of America’s longest war.”
—Publisher’s Weekly