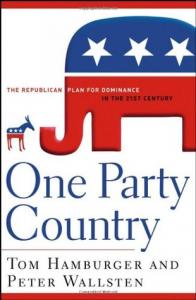 One Party Country: The Republican Plan for Dominance in the 21st Century

The single greatest priority for the Bush administration has been the consolidation of executive power. That power has been wielded like never before for partisan gain: to win current and future elections for Republicans across America. The Democrats had everything going for them in the 2006 election, but all the obstacles Republicans have been constructing paid off by denying them an even bigger win. Democrats are confident going into 2008, but the Republican advantages endure. Through a rigorous examination of the GOP machine, this book reveals how a true Democratic resurgence faces steep barriers--barriers erected by conservatives who have worked to build their dominant position since the days of Barry Goldwater.


“In this astutely argued polemic, the authors note that political hegemony today has less to do with a party's popularity than it does with pinpoint marketing, judiciary packing and artful gerrymandering….From lobbying to single-issue marketing to co-opting traditional Democratic constituencies (Hispanics, African Americans, Jews, immigrants), the authors find that the Republican machine appears to have identified and commodified every potential vote in the nation….This convincing work certainly calls attention to the threat that the U.S. may soon be one red state nation under God, but for those who would sooner be dead than red, the authors offer little solace.”
—Publisher’s Weekly

"One Party Country does a good job of spelling out the GOP electoral strategy objectively and in detail, and without evidence of partisan leanings."
—Christian Science Monitor

“For anyone who wants to understand why Republicans are winning elections and why they are likely to do so in the foreseeable future, One Party Country is a must read.
—Lee Drutman, co-author of "The People's Business: Controlling Corporations and Restoring Democracy."