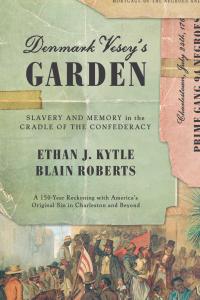 Denmark Vesey's Garden: Slavery and Memory in the Cradle of the Confederacy

In the tradition of James Loewen’s Lies My Teacher Told Me, a deeply researched book that uncovers competing histories of how slavery is remembered in Charleston, South Carolina—the heart of Dixie

A book that strikes at the source of the recent flare-ups over Confederate symbols in Charlottesville, New Orleans, and elsewhere, Denmark Vesey’s Garden reveals the deep roots of these controversies and traces them to the capital of slavery in the United States: Charleston, South Carolina, where almost half of the U.S. slave population stepped onto our shores, where the first shot at Fort Sumter began the Civil War, and where Dylann Roof shot nine people at Emanuel A.M.E. Church, the congregation of Denmark Vesey, a black revolutionary who plotted a massive slave insurrection in 1822.


•Named a Best History Book of 2018  by Kirkus Reviews


"Kytle and Roberts’s combination of encyclopedic knowledge of Charleston’s history and empathy with its inhabitants’ past and present struggles make them ideal guides to this troubled history."
—Publisher's Weekly (starred)


"Denmark Vesey’s Garden uses the small place of Charleston, South Carolina to tell a large tale, what we remember of history and what we prefer to forget.  It is a fascinating and unflinching performance, showing that all of American history can inhabit a few greying square miles."
—Edward Ball, National Book Award-winning author of Slaves in the Family


“Nothing has shaped this nation more than slavery and its legacy.  Kytle and Roberts’ meticulous research, compelling writing and thoughtful analysis is vital to our nation at a time when we were haunted by a history we need to understand more deeply.”
—Bryan Stevenson, New York Times bestselling author Just Mercy: A Story of Justice and Redemption


“Denmark Vesey’s Garden reveals that the long struggle over how Americans remember slavery has been inseparable from the long struggle for racial justice.”
—Ibram X. Kendi, National Book Award-winning author of Stamped from the Beginning: The Definitive History of Racist Ideas in America


“Ethan Kytle and Blain Roberts remind us that the cost of whitewashing the history of racial enslavement and its legacies continues to be too great a burden to bear for American democracy. For any reader interested in current political debates over Civil War memory and monuments, this book is a must read.”
—Manisha Sinha, author of The Slave's Cause: A History of Abolition


“Denmark Vesey’s Garden will have enormous implications for the entire country.”
—Douglas Egerton, author of Year of Meteors, Thunder at the Gates, and The Wars of Reconstruction