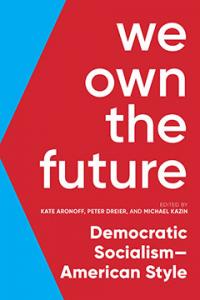 We Own the Future: Democratic Socialism—American Style

A stunningly original and timely collection that makes the case for “socialism, American style”

It’s a strange day when a New York Times conservative columnist is forced to admit that the left is winning, but as David Brooks wrote recently, “the American left is on the cusp of a great victory.” Among Americans under thirty, 43 percent had a favorable view of socialism, while only 32 percent had a favorable view of capitalism. Not since the Great Depression have so many Americans questioned the fundamental tenets of capitalism and expressed openness to a socialist alternative.

We Own the Future: Democratic Socialism—American Style offers a road map to making this alternative a reality, giving readers a practical vision of a future that is more democratic, egalitarian, inclusive, and environmentally sustainable. The book includes a crash course in the history and practice of democratic socialism, a vivid picture of what democratic socialism in America might look like in practice, and compelling proposals for how to get there from the age of Trump and beyond. To quote Franklin Bynum, a socialist elected in 2018 as judge in Harris County, Texas, “It’s about showing we have a vision of a better future, in a time when there’s an overwhelming sense of despondency and most Democrats are doing nothing to dissuade us of that.”

With contributions from some of the nation’s leading political activists and analysts, We Own the Future articulates a clear and uncompromising view from the left—a perfectly timed book that will appeal to a wide audience hungry for change.